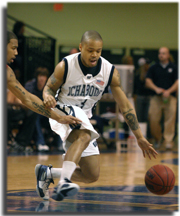 In its final regular season game, the Washburn men’s basketball team fell to the sharp-shooting No. 7 Central Missouri Mules 78-62 Saturday night at Lee Arena. Washburn finished the year with a record of 8-19 record, 4-14 in the MIAA. A 58-57 loss to Fort Hays State last Wednesday eliminated the Ichabods from playing in the MIAA postseason tournament this weekend.

“Nobody on the team gave up, I loved playing with all of them, said Michael Williams,” Washburn senior guard. “It was a good group of guys, and I wouldn’t have traded my teammates for anything, and I appreciate everything they contributed to the team this season.”

The Mules were on fire from 3-point range connecting on 8-of-18 3-pointers in the first half to help put them in front 44-24 at halftime. With five minutes remaining in the game, Washburn junior guard Grant Hargett hit a 3-pointer, but Washburn still trailed at that point 67-50.

“It’s been a tough week with the double-overtime loss at Northwest and the one-point loss at Hays,” said Washburn head coach Bob Chipman. It’s not easy when you haven’t won a lot of games, but they hung in there pretty good. The air was out of our balloon tonight, but Central had a lot to do with that, they’re a great team and shot it unbelievable, and it looks like they have all the weapons so you kind of pick your poison with them.”

Central Missouri hit 14-of-27 3-pointers for the game, and had four players in double-figure scoring led by Zach Wright, senior guard, who scored 19 points. Washburn was led by Frank Phifer, senior forward, who scored 19 points on 9-of-17 shooting from the field. Junior forward Brady Sisk added 12 points and 13 rebounds, but the Ichabods made only 4-of-17 3-pointers on the night.

“When they shoot it like that there is no way we can play with them or anybody else can play with them, because they are so tough inside,” said Chipman. “In the first half I thought our guys were in shock, in the second half they came out and played. Frank led the way for us, Brady had a good night, our guards struggled, but Central has good guard play.”