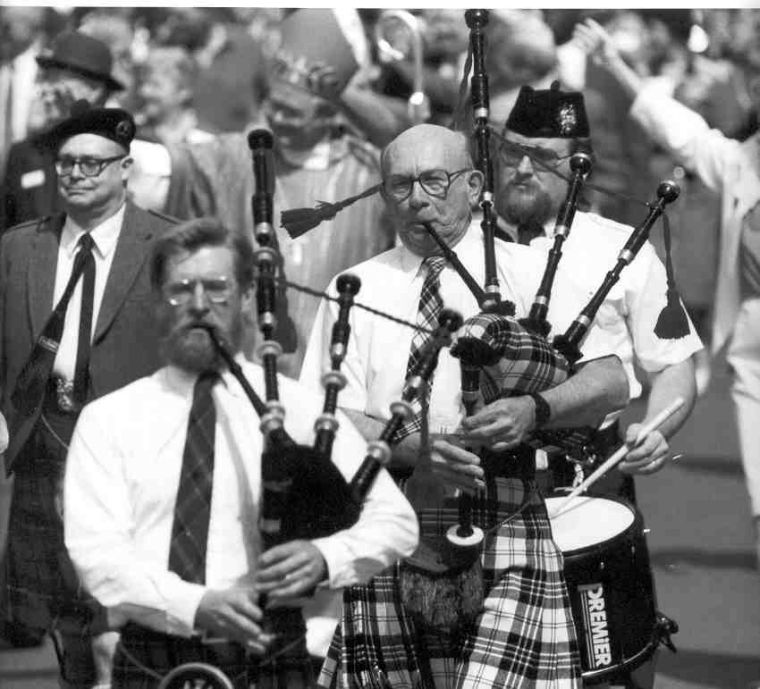 The 70s. A term that brings to mind images of hippies, Richard Nixon and Robert DeNiro’s psychotic taxi driver. Certainly not, for most people anyway, bagpipes.

But in Topeka, circa 1976, a bagpipe movement was formed.

“The Pipers of the Plains began when my father decided he wanted to learn bagpipes,” said Tom Averill, professor of English at Washburn University and longtime member of the Pipers. “Their goal was to get good enough that they could pipe in the Collins Park 4th of July Parade in 1976. ‘Seventy six was a time when lots of people were interested in finding their roots and exploring the diversity of America.”

Stuart Averill joined up with friend Bill Read and together they formed the Pipers of the Plains, a group that now includes more than 30 members. This group, which ranges in age from 12 up to that vicinity of numbers most people don’t like to admit to, is a much anticipated part of Topeka’s annual St. Patrick’s Day Parade. Those who attend the parade know they are in for a performance that will inevitably include a group of costume-clad bagpipers, marching in time to the nostalgic Irish melodies they create through breath and finger dexterity. Those who don’t attend the parade but prefer spending the holiday in a local pub or bar know that they will be privy to the same treatment – after the parade, the Pipers spend the rest of the afternoon and evening performing at any bar that will have them.

The Pipers are a practiced group, with rehearsals once a week and regular performances throughout the year. Anyone who wants to learn is welcome, all they need do is ask. And they often do.

“For a long time Pipers of the Plains was just my dad and Bill Read,” said Averill. “But part of the tradition is that we will teach the pipes to anyone who wants to learn. We’ll do a parade and people will come up afterwards and say ‘gee, I’d like to learn the pipes.’

Averill warns, however, that learning to play the pipes doesn’t come easy.

Averill has been a Piper since he joined in the early 90s. He has many fond memories of being in the group, including one St. Patty’s Day at the Dutch Goose.

“The place was packed, because there was a KU game that day as well,” remembers Averill. “We arrived in the middle of the game and there was this ambivalence from the crowd about whether they wanted to listen to us or watch the game. We finally just played during the commercials and the crowd was just completely into both the playing and the game. We were even able to play the KU fight song on the pipes so that was pretty amazing.”

Averill’s dad is no longer marching with the band he started 32 years ago. He died in 1996. But Averill plays his dad’s pipes now, so the instrument that got this whole thing started can still be heard among the warbly and, as Averill puts it, intense noise put forth each year on the celebration of St. Patrick.

And about that first performance many years ago in 70s-era Collins Park?

“He said they were respectable,” said Averill of his dad. “He thought they played a very respectable performance.”