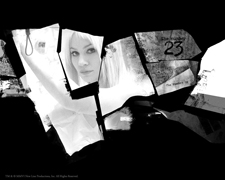 After much publicity and dramatic advertising, Joel Schumacher’s “The Number 23” made its debut in theaters everywhere on Feb. 23. However, the movie focuses on devastating events and coincidences that add up to 23, the movie itself fails to make much sense.

Jim Carrey stars as Walter Sparrow, the painfully ordinary dog-catching husband and father who stumbles across the “novel of obsession” by pure chance-and begins to realize events mirror his life. Sparrow’s painstakingly patient wife Agatha (Virgina Madsen) tries to dissuade him from his illusions of psychological torture, but Sparrow continues to read the book and becomes convinced he is bound to the same destiny as the book’s main character.

As the movie more than conspicuously points out all of the apparent appearances of the number 23, viewers are annoyed and a bit offended by the screenplay that implies its viewers aren’t smart enough to figure some of the events out for themselves. The unintentionally humorous parts of the movie include one-liners by Carrey like, “Ned isn’t just a dog, he’s the guardian of the dead.” Still think the movie’s a psychological thriller with a surprise ending? Viewers more than likely added up the plot and had the numbers-driven plotline solved within the first 30 minutes.

Resist the peer pressure to go along with friends to the movie that’s supposed to be shocking and bizarre. Instead of making you think, this one will have viewers feeling a little on the daft side. My advice to Schumacher: take a break on the thrillers-a phrase that can have 23 letters if you take out the “a” the movie won’t get from critics.