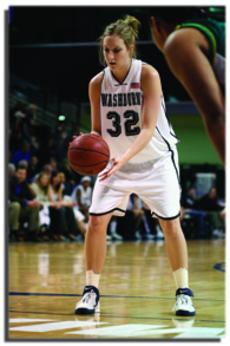 Brooke Ubelaker, senior forward, concentrates before shooting a free throw in the Missouri Southern game. Ubelaker totaled 16 points on the night, including her 199th career 3-pointer.

You never know but until you do, in the words of Al Davis, “Just Win, Baby.”

With conference now out of the Lady Blues hands, they’re not hoping for other teams to take care of business against No. 1 in the MIAA Missouri Western, rather they’re focusing on what is in their control, the ability to win.

“We lost to a good team and one loss isn’t going to break our season,” said Brooke Ubelaker, senior forward. “We’re just going into every game and playing as hard as we can. Nothing is guaranteed in this conference, any team can win on any given night. But we don’t rely on other teams to lose to help our success. We have to just take care of ourselves. We just play for us, and whatever happens after that, happens.”

After being swept by Missouri Western in the regular season series, the Lady Blues trail the Griffons by one game in the conference standings. The Lady Blues’ opportunity to steal one back won’t happen until the conference tournament, and by then the regular season conference champion will already be determined. Thus the Lady Blues have to win the rest of their games and need a little help from the rest of the league to add number five to their four consecutive MIAA championships.

“We just really have to do our job even though it’s not in our hands anymore,” said Cindy Keeley, senior guard. “We have to take care of our games or we really don’t even have a shot. We have to hope someone comes out and helps us out a little bit but we got to focus on our regional games now.”

The Lady Blues also trail Missouri Western in the South Central Regional standings at No. 2. The No. 1 and No. 2 seed receive first round byes, but more importantly, the No. 1 seed hosts the playoffs all the way through the regional championship.

“Right now it’s up to some other teams to beat them,” said Megan Sullivan, senior forward. “Our focus is just to win the rest of the games. So we can get second seed in the tournament and maintain our second seed in the region, which is really important. We probably won’t get those two games back which is fine, we just have to win the rest of the games.”

The Lady Blues have done nothing but win since falling to Missouri Western 47-49 on Jan. 27. The Lady Blues picked up consecutive victories over Missouri Southern 81-50, and Pittsburg State 73-56 this past week.

“It’s good to come out and be back on the court,” said Ron McHenry, head coach of the Lady Blues. “It’s like the start of the season all over where it was kind of a grind, win the games you need to or have to and move on to the next.”

Hoping for three straight wins, the Lady Blues will travel to Southwest Baptist, Tuesday, Feb. 6. The Lady Blues got the best of the Bearcats earlier this season at Lee Arena, 88-56.

The Lady Blues will finish the week at home against Truman State, for one of the only two home games left this season. The Lady Blues survived an early scare with the Bulldogs trailing 2-16, but came back to beat them 83-58 in the earlier matchup in Kirskville, Mo.

“We have a few home games left,” said McHenry. “We have six seniors that are not going to play a lot at home. So it’s important they get out and play well and they’re teammates.”