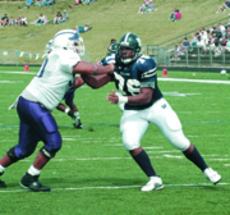 After finishing the season, Lewis was invited to play in the Texas vs. the Nation all-star game.

“From what I heard, the scouts were pretty impressed,” said Lewis. “I haven’t played with Division I players until now and most said I couldn’t hang with them. I proved them wrong.”

Lewis played for the Nation in their 24-20 victory over Texas in the first Texas vs. the Nation all-star game Feb. 2. Lewis recorded three tackles, one sack, two tackles for a loss and a pass breakup.

“Overall I felt pretty good,” said Lewis. “I finally got a chance to play against the Division I guys and that panned out. It was a pretty fun experience overall.”

But with the ultimate goal looming, the fun is over for Lewis, and he is all about business. Lewis is currently training in Florida to get ready for Pro Days at Washburn and Kansas State University. Craig Schurig, Washburn head football coach, arranged for Lewis to participate in Pro Days at K-State where there is likely to be more scouts than at Washburn.

“Pro Days are pretty much composed of individual players they want to see,” said Lewis. “Schurig arranged K-State because they will have more scouts there than at ours.”

Although Lewis hasn’t been invited to the NFL combine, where the nation’s top prospects gather, he is confident in his chances to play at the next level.

“Even though I haven’t been invited, I’d be ready to go if I was,” said Lewis. “I am pretty confident. As long as I work hard, it should pay off.”

Lewis has played for Washburn the last four years, winning a Mineral Water Bowl championship and the school’s first-ever MIAA championship in 2005. But his senior year was perhaps his best, landing him several honors. Lewis was named MIAA Defensive Player of the Year, and was honored on three All-American teams – the Don Hansen’s Football Gazette, American Football Coaches Association and the Associated Press Little All-American teams.

“The honors really haven’t even hit me yet,” said Lewis. “I’m too busy going for the ultimate goal. The awards will be set on the back burner until I have time to relax and think about it. I think, though, my family realizes how special each honor has been.”

It was apparent Lewis was on the brink of something special as NFL scouts came to see him multiple times throughout the season. Scouts from the New York Giants, Indianapolis Colts, Kansas City Chiefs and the Atlanta Falcons all came to see Lewis and fellow senior teammate and defensive back, Fletcher Terrell.

“I will play for anyone that picks me up,” said Lewis. “But if I had to pick, it would be the Chiefs. They’re close and my dad could come see the games and not have to take off work.”