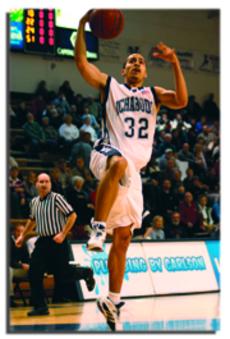 Grant Hargett, junior guard, goes for a layup against Truman in Saturday's game.

The MIAA has issued a public reprimand to Washburn’s athletic department. According to a press release issued by the MIAA, the reprimand was “for the violation of NCAA by-laws with regard to the August 2006 trip to China by the men’s basketball team.” The violations involved new players that were allowed to travel with the team. The MIAA cited Washburn for “a lack of commitment to compliance.” The MIAA reprimand is in addition to the NCAA sanctions.

“We first learned of the violation on Aug. 25 when the MIAA informed us that we were being investigated for a possible rules infraction,” said Loren Ferre, director of athletics.

Ferre said Washburn self-imposed sanctions immediately when the department learned of the problem. The sanctions included suspending three players that had minutes in two games in China. The players sat out the first two regular-season games.

“What was hurtful to us is the part about lack of commitment to compliance,” said Ferre. “We take compliance very seriously. We hold monthly meetings with our coaches to make sure they understand the rules, and are following them.”

The NCAA last reviewed Washburn’s compliance practices in the fall of 2003.

“We were given a clean bill of health,” said Ferre. “They praised how we were following procedures to help make sure we meet compliance.”

Despite efforts to meet compliance standards, there was an oversight in this situation.

“We understood that if the kids were enrolled, with their transcripts here, and they met eligibility, which they did, that as soon as school started they could play,” said Bob Chipman, head men’s basketball coach. “We held them out of the games until school began back home, then we let them play in the last two games. I thought we were OK. We are very careful to follow all NCAA and MIAA rules.”

The three players who mistakenly played in games during the trip were Reed Hein, junior guard; Grant Hargett, junior guard; and Jake Carter, freshman forward. Michael Williams, senior guard, and Sergio Negrin, junior guard, also made the trip, but were not suspended from any regular season games since they did not play while in China.

“[The players involved] were really disappointed. They would never have done anything to violate the rules. The responsibility falls to me, totally,” said Chipman. “Ordinarily schools are investigated for giving players money or things like that. This was a different thing completely.”