‘Fall from Grace’ all about signs 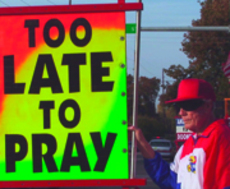 The Westboro Baptist Church and their infamous signs have been documented in "Fall From Grace," a film by KU film student Ryan Jones

Marvin Auditorium was packed with a large chattering audience that added a little more life into the film through their comments and observations.

The film, “Fall From Grace,” shows clips of the Phelps family at their pickets, their home’s and their church.

It opened with a quote from Melville’s Moby Dick and the instantly recognizable chords and beat of a church hymn. Soon the face of Pastor Phelps appeared, a face and voice so well known in the Kansas capital.

Although there was little information about Fred’s background or of the church before the infamous picket signs came out, Jones kept a good focus and allowed the main subject of his film to be scrutinized more fully.

“Fall From Grace” focuses on the current life of the members of Westboro, especially the pickets around the community and the pickets at soldiers’ funerals.

Jones did his job and churned out one of the few pieces about the Phelps family that has actually been unbiased. The film doesn’t answer a lot of questions, there’s still a lot of mystery surrounding what drives the Phelps and the other members of Westboro Baptist. But that is exactly what keeps the film objective.

Jones has allowed audiences to see into the life of the church, as well as the lives of several others who are forced to react to them.

In an emotional interview and the film’s most touching scene, the wife of a fallen soldier shares her experiences of learning about her husband’s death and then the added shock of learning the Westboro Baptist Church is coming to picket.

In another, extremely funny clip, a group of foreigners stand in front of a picket and comment, “This is the kind of crazy Americans we’ve heard about, but never seen.”

Still, the most interesting moments come from the children in the church.

Standing outside the pool that resides beside Westboro Baptist and its upside down flags, the young kids comment about the pickets. While this may be one of the biggest concerns about the church’s antics, the quotes from the children bring a stirring, almost eerie quality to the kids. They are asked how they feel when people yell or say nasty comments while they picket.

“You evil bastard. You’re going to Hell…FOREVER,” answers one young boy into the camera and then, almost as an afterthought adds, “You suck.”

The film offers a look at a subject that almost always seems to capture attention and outrage. It’s entertaining with smartly chosen quotes and scenes. The only information Jones left out, that I wish had been there, would have been about how the pickets got started at Gage Park and how the community’s reaction to them seemed to fuel Westboro’s ever-burning fire. But, really, this is a great film by someone who clearly has talent.