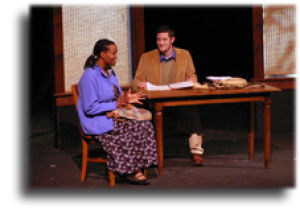 The two-person cast of “I Have Before Me a Remarkable Document Given To Me By a Young Lady from Rwanda” was wonderful.

The play follows a survivor of the Rwandan genocide of the Tutsis. She seeks to publish her book about what happened to her people, but her writing teacher pushes her to rewrite it with more personal accounts instead of bare facts. He also begins to have an attraction to her, despite the fact he’s already married and his own writing begins to be inspired once again.

Pauline Komu as Juliette and Charles Logan as Simon embodied their characters without break. It was one of the best-performed pieces I’ve seen at Washburn’s Andrew J. & Georgia Neese Gray Theatre.

The two had a nice ease between being dramatic and being funny. The slight humor incorporated into the piece gave the audience a nice break from the horror stories of Rwanda in the mid-90s.

Aside from the small ensemble, the minimalist quality of the set made a great background and added beauty without distraction. The three windows angled behind two wooden chairs and a table were all that graced the small set, aside from Komu and Logan, of course.

It is amazing how much the scant materials could provide the audience. It was an easy adjustment to view the set as several different places.

I walked away without a complaint. The play is shorter than most, just over an hour long. It’s a nice length and the flow, the pulse of the play was kept throughout making it hard for the mind to wander away from the events on stage. The lighting also added to the pulse, giving a nice visual guide for where the story was going before the actors began to speak.

“Rwanda” is more than a well-designed, well-acted production though. It deals with the after effects of the survivors from the genocide that happened in Rwanda in 1994. It picks up where “Hotel Rwanda” left off, just with a different character.

The struggles of Komu’s character give fresh life and reality to the atrocities that were greatly ignored by the U.S. at the time. It serves as a memory that shouldn’t be forgotten and it helps us to remember the lives that were lost. That is its importance.