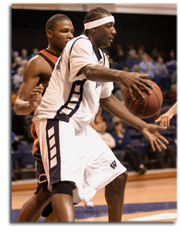 Farewell Phifer Frank Phifer, senior forward, faced off against the Central Missouri Mules for the last game of his basketball career at Washburn. Phifer had 19 points and six rebounds in the Ichabods' 78-62 loss to the Mules.

The No. 7 Central Missouri Mules celebrated their 78-62 defeat of the Ichabod basketball team Feb. 24, by cutting down the nets in Lee Arena, having just wrapped up the MIAA regular season title.

Meanwhile, the loss put the finishing touches on a second straight disappointing season for Washburn, dropping them to an 8-19 record and to 4-14 in conference play.

“After a normal season comes to an end, you take a day or two and evaluate where the team is, as well as evaluating myself,” said Chipman. “I think since we’ve had so many losses this season, to be quite honest, I’ve been doing that the whole year.”

“We’re always recruiting,” said Chipman. “I haven’t made any decisions on these current players, and will not until I talk with them, so I don’t know what’s going to happen. We need a point guard, there is no question; you are as good as your guards.”

The status of Kyle Snyder, junior forward, remains unclear; a shoulder injury ended his season after only 16 games. Snyder led Washburn with 7.8 rebounds per game. Chipman said doctors have yet to rule out Snyder for his senior season.

As the recruiting season starts to heat up, Chipman said he is definitely going to evaluate his team’s personnel. He also offered important advice for returning players regarding the weight room.

“We’re going to have to see who really wants to commit to this program,” said Chipman. “The current guys really need to focus on stepping up their level of conditioning and strength.”

Chipman also said out-of-state players will be primary recruiting targets as he seeks to find players that can contribute right away.

“We need some out-of-state kids that are impact players,” said Chipman. “The formula for us has always been getting the best Kansas kids that we can get. We have 10 scholarships; we like five to be the best Kansas kids we can get, and five to be the best out-of-state kids we can get. We got away from that formula this year, but we’re going back to it because it has always worked.”

Also contributing to Washburn’s woes this season was a hectic non-conference schedule, which had the Ichabods playing the majority of their games on the road in hostile environments. Chipman acknowledged that the way he devised the schedule wasn’t conducive to his team’s success.

“Everybody in America brings in easy teams and tries to get some wins. With this team, I thought it would be best if they were really tested, and try to get them ready for what I knew was going to be a very tough conference where every team is capable of beating you.”