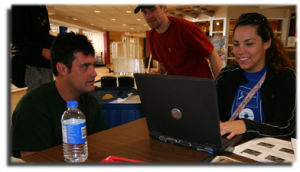 Vince Bowhay and Lacey Keller will be the next Washburn Student Government Association president and vice president.

With a win by 279 votes, Bowhay said he was excited.

“I’m very thankful that Washburn chose me as their next president,” said Bowhay.

He said their first priority would be to find a qualified executive staff, and policy-wise, they will start to focus on Washburn students’ health care.

He credited his victory to hard work during the campaign, and talking to multiple student organizations – even if they only had a few people in them. The final vote was 532 for Bowhay and Keller and 253 votes for Nick Woolery and Andrea Chancey.

Josh Shald, president of WSGA, said he believed this year’s voting base was probably more educated than in past years due to the hard work done by Shelby Shinkle, chief of staff for WSGA, and the WSGA communications committee.

Bowhay and Keller will officially start their duties on April 11.