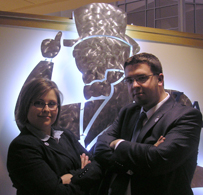 When Nick Woolery and Andrea Chancey decided to run for president and vice president of the Washburn Student Government Association, they had two priorities in mind -powering the student body and enhancing the amount of activities the Washburn community offered.

At the top of their list is student recognition, not just for student organizations, but also for people in the classroom, athletics and other academic groups and teams.

“We’re trying to stay away from big projects on campus, because those are things that any administration can pursue,” said Woolery. “Those big projects aren’t going to happen next year.”

The candidates are hoping provide students with the opportunity to receive funding or receive recognition for their time on campus.

Woolery and Chancey cited tutoring as a program they would like to pursue.

“There is some [tutoring] on campus, but it’s not good enough and it’s also not publicized well enough,” said Woolery.

Chancey explained the candidate’s desire to provide students with topical services that they could use while they were attending Washburn.

“We want to provide the students with services they can actually use now, instead of 10 years from now,” said Chancey.

The pair has developed a number of policies they would like to see:

Woolery has spent a lot of time in college working as a Bonner Leader. He planned a trip that took over 90 people to help with the aftermath of Hurricane Katrina, and said he wants to be able to expand those opportunities to all Washburn students. However, the candidates realize that money is always an issue.

They plan to set aside part of the WSGA money to give to groups who want to do work in the community, but have used their organization funding for something else, like a conference or a speaker.

The money given to these organizations wouldn’t have a limit as to how much could be given out to each group.

Since this would be a new program, Woolery said it would be trial and error. They plan to have a pool of money, and use it on a first-come first-serve basis, and when it’s gone – it’s gone.

“If there is a big issue in the community or a big project that needs to be done, it doesn’t limit them,” said Woolery.

Promoting athletics and teams like the debate, mock trial and music groups are a main priority for Woolery and Chancey.

Right now, they are working to plan athletic pre-game nights. This would include going to a local restaurant, and trying to get a radio station to host a show there and talk to the Washburn athletes.

“Giving them an opportunity to be heard would be a really good thing for them,” said Chancey.

Woolery and Chancey are looking forward to serving students who aren’t necessarily involved in athletics or student organizations.

“I’m really passionate about athletics and service to the community,” said Woolery. “College is a unique experience because we have classes, but we also have a lot of free time, which is a good chance for us to give back and get involved in as much as you can.”

Woolery and Chancey would also like to recognize students based on their involvement in the classroom.

“A lot of the programs we would like to start would benefit the student that isn’t in a student organization, it would just help them in their everyday activities,” said Woolery.

Another aspect to the campaign and student recognition is to get students who don’t have the time to be on WSGA, to still be able to work with the organization on different projects.

Woolery and Chancey would like to bring more of a voice to students by creating student issue committees. These committees would be made up of regular students, rather than senators, to research possible opportunities and ideas for the Washburn community.

“It would be just another voice on campus, instead of 32 senators that are just hearing things from students,” said Woolery.

WU in the Community

Woolery and Chancey would like to change the WU in the Community program. Usually, WSGA teams up with area organizations to pick up trash in the College Hill area and do various other service projects around the community.

Next year, they would like WSGA to team up with Habitat for Humanity and have the students build a house for someone in the community who needs it.

“You can go and pick up trash anytime,” said Chancey. “If you build a house, that will stay there and you’ll be able to see it and feel like you really gave something back.”

Overall, the pair said they make a great team and should be the ones to help students in the coming year because of their passion for the student body.

Chancey also noted they bring a lot of different ideas to the table and can relate to many different students and organizations.

“All kinds of different areas that would bring a lot of different perspectives to student government,” said Chancey. “We can incorporate [those perspectives] into WSGA and what WSGA is about.”