Consider ‘For Your Consideration’ 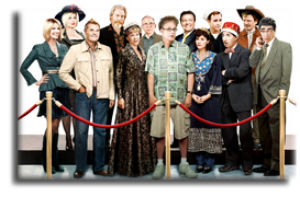 Movies serve a role as an escape from our daily lives. For an hour and a half, we forget about our stressful lives and we get the opportunity to laugh, cry and experience a myriad of other emotions in a theater or at home.

“For Your Consideration” is a movie that will bring you a few laughs and, let’s face it, we all need to do that every now and then. The film is all about the reaction three actors have about some impending Oscar buzz in regards to their latest movie together. This comedy came from the same man behind such movies as “Best in Show,” “A Mighty Wind” and “Waiting for Guffman.” The man behind these movies would be none other than Christopher Guest. He also appears in the movies he directs in roles of various importance.

“For Your Consideration” has an incredibly star-studded cast. Catherine O’ Hara plays one of the three central characters, Marilyn Hack, an actress who is learning about Hollywood’s cruelty towards middle-aged women. Harry Shearer plays Victor Alan Miller, a has-been who earns enough recognition to illicit a little buzz. Parker Posey plays Callie Webb, a slightly insane young actress with a few interesting quirks, such as her one-woman show “No Penis Intended.”

The movie follows the story of these three characters as they vie for their respective Oscar nods and what happens to them later on. Among these three central players are the recurring performers in Guest’s films including Eugene Levy, Michael McKean and Jennifer Coolidge. Sandra Oh has a small cameo role. You will most likely recognize her from the TV show, “Grey’s Anatomy.” More cameos in “For Your Consideration,” include Richard Kind from the long-passed show, “Spin City” and guitar hero Joe Satriani.

“For Your Consideration” is great for its one-liners and curve balls.

Chuck Porter (Fred Willard): “That movie has a budget of almost $300 million. My gosh! Just how much does a funny-looking hat cost anyway?!”

Chuck Porter: “Marilyn Hack. Now I know what it feels like to stare down into the Grand Canyon.”

Overall, this movie is great with some good jokes but there is a possibility of some things flying over a few heads. In which case, go ahead and back-track a little so you can get the laugh you missed. This is why you watch movies in the privacy of your home.