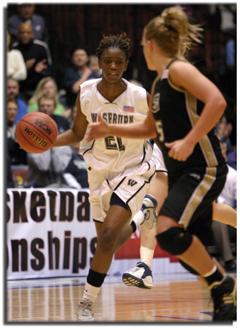 Corkey Stiger, junior guard, drives past the Emporia defense in the MIAA semifinals matchup. Stiger hit 5-of-7 3-pointers in the game.

Stiger elevated her level of play last weekend at Municipal Auditorium in Kansas City, Mo., leading the Lady Blues to the MIAA post-season title while garnering tournament most valuable player honors. The 5-foot-9-inch junior shooting guard out of Hopkinsville, Ky., averaged 18.3 points per game while shooting 55 percent from the field. Stiger said she had extra motivation after finding out various newspapers in Kansas City said Washburn wouldn’t win the MIAA tournament.

Stiger transferred to Washburn last year from Trinity Valley Community College in Athens, Texas. She averaged 19.5 points per game while shooting nearly 51 percent from the field for Trinity Valley during the 2005-06 season.

Trinity Valley is the same school former Lady Blues basketball star Jennifer Harris led to a national championship in 2004, although the two never played together. Stiger, however, did play in the same backcourt at Trinity Valley with University of Tennessee player Shannon Bobbit. A 5-foot-2-inch point guard, Bobbit is averaging 8.3 points per game while starting for the South Eastern Conference champion Lady Vols.

“I had a lot of good offers when I was being recruited out of Trinity Valley,” said Stiger. “I was offered scholarships from [University of Louisville], Kentucky [University], and Indiana [University], but I never took visits to any of those schools. I was kind of up and down as far as grades, so I didn’t know where I would qualify.”

“I felt like I just fit right in at Washburn,” said Stiger. “I bonded with the coaches and just talking with them, they were more open with me, letting me know what my status on the team would be and how they would help me to graduate. As far as my future after basketball, I mainly wanted a coach who was going to be there for me after my basketball career.”

Stiger, who was named second-team all-MIAA after averaging 13.3 points per game for the Lady Blues this season, said Toni Gross, first-year assistant coach, also played a big part in her decision to play for Washburn.

“Toni really made me comfortable,” said Stiger. “She talked with me a lot, and just by her being a female, I feel like I really related well with her. I’ve always been coached by males, so it felt really good to have a women on the staff.”

McHenry said he was impressed with the relative ease at which Stiger made the transition from Trinity Valley to Washburn, as well as how smoothly she has fit in with her teammates.

“Corky’s been a great teammate,” said McHenry. “She’s fit in with the group very well, which at times can be difficult when you are new to a group of kids that have been together for a long time. She’s just one of those kids that smiles a lot and has a great personality – and a ton of ability.”

Before the MIAA tournament began, McHenry said he was counting on his versatile guard’s offensive consistency to lead the team deep into post-season play.

“She has a different game than the [Jennifer] Harris kid, but equally as potent,” said McHenry. “Her knack is to score the ball. She has pretty good 3-point ability and she puts the ball on the floor nicely. We’re really working on trying to get her to score out of the half-court offense. When you get into the postseason you have your go-to players, and she’s definitely one of ours.”