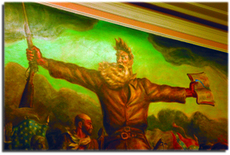 John Steuart Curry's famous painting of controversial abolitionist John Brown. Original murals within the dome actually contained nude Grecian women which were, in 1902, considered too obscene to be kept on the walls.

Campaigning for elections has always been tough. Today Hilary Clinton and Barack Obama begin offering their presidential promises. Students Nick Woolery and Vince Bowhay have given their platforms, but Kansas governor John W. Leedy gave a couple of the most bizarre offers in 1896.

The newly-finished State Capitol building awaited and Leedy spouted, “If I’m elected I’ll invite everyone who likes to come into my office, put their feet under my table and spit tobacco.”

Tempting as this offer was, Leedy had yet another promise that if he won the election everyone would be invited to “come into [his] office and take a bath in [his] private tub.”

Leedy was elected and immediately set to installing a bathtub at the Capitol. The trend was even carried on by other officials of the time.

That’s merely one of the stories that surround the majestic 399-by-386-foot building. Many of the stories have been well documented like Leedy’s, which was published in the Topeka Journal in 1937. Others, however, remain the subject of controversy like Old Cottonwood.

Old Cottonwood was a tree that graced the lawn of the State House, from the early days when the building was being erected, up until the ’80s. Today, a younger heir to Old Cottonwood stands next to a plaque commemorating the beloved tree.

One of the most popular rumors about how Old Cottonwood came to be is it was used as a stake during the construction and grew into a towering giant. Others say it was grouped in with a bunch of discarded dying cottonwoods and took root. Perhaps, it was a seed blown in the wind that nestled into the ground.

The State House itself was also once expected to be irrelevant by 1986. State accountant A.R. Jones told the Topeka Journal in 1936 that the building wouldn’t last more than 100 years because of the depreciation it had already befell.

A building so artistically made with its towering columns and marble has created a reputation in its early history for being artistically intolerant.

In 1902 the dome had been decorated with portrayals of Grecian women, but they were nude and the art had to be redone.

Pioneer Mother Memorial, a statue done by Robert Merrell Gage on the Capitol grounds, was set up to honor the pioneer women. In 1952 two 15-year-old boys vandalized the statue with paint. When they were found out, they were punished by having to scrub the paint off the monument.

The history that engulfs the Topeka Capitol Building is immense. These are only a few of the stories it has to tell.