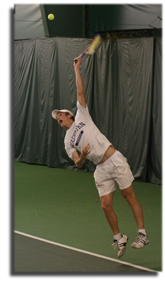 Despite having to start down 0-2 because of ill players, the Lady Blues tennis team swept both matches in Tulsa, Okla., two weeks ago.

So with a full roster and a home-court advantage this past weekend, the Lady Blues lived up to expectations, picking up victories over Colorado State-Pueblo and Metro State.

“In Oklahoma, we had two girls sick so we started both matches down 0-2, so it was good we could pull those matches out,” said Audrie Miller, junior. “Tonight I thought everybody played really well. We picked it up in doubles and swept all three, so that took pressure off of singles.”

The Lady Blues swept Colorado State-Pueblo 8-0 Friday. They finished the weekend with a win over Metro State 9-0 Saturday.

“It’s good to start to have that under your belt, we are definitely confident,” said Lauren Harris, junior. “We played good teams and it’s good to have those wins.”

The Lady Blues finished the weekend 6-0 in doubles, a concern the Lady Blues needed to address over the off-season. After losing four matches on splits last year, the Lady Blues realized this could easily be overcome by improving their doubles play.

“I think a lot of it was dropping a couple doubles matches because I think we are pretty strong in singles,” said Miller. “We’ve been doing a lot of doubles drills to work on our volleys and just a mentality of staying aggressive.”

The off-season work has allowed the Lady Blues to become comfortable in their roles. According to Harris, last year’s memories have all but disappeared and they are focused on winning every match.

“I think we all feel like we can handle pressure better and that boosts our confidence,” said Harris. “We don’t think about last year and the close losses. We are just going for the win every match.”

After a lackluster finish last year, the odds against the Lady Blues capturing an MIAA championship, a task that hasn’t been done since 2004, is high. However, with many returning and a new No. 1 spot player in junior Diana Goldsmith, the goal may not be too far offhand. Miller explains they just have to worry about themselves and the rest will fall in to place.

“I think last year we set some goals but this year, for me, I’m trying to go out and focus on one match at a time and really focusing on having fun, because I think our team plays better when we are having fun,” said Miller. “So I just think if we take one match at a time, the other stuff will fall into place.”

After picking up victories over Colorado State-Pueblo and Metro State this past weekend, the Bods improved their spring record to 4-0.

“On paper, the teams we are playing, we beat them easy last year, but that doesn’t matter. We don’t have to look at those things,” said Rutger Vliegenberg, junior. “It feels good to start the season this way.”

Even though there is definitely a benefit to maintaining a winning streak in any sport, it is especially important in tennis, a game of repetition and rhythm. Even Vliegenberg, who is one of the top singles players in the conference, needs repetitions to stay on top of his game.

“Each individual is different but I need rhythm when I play,” said Vliegenberg. “I need some matches in me before I can play my A-game. For myself and the team to have a winning streak is great. We will keep playing challenge matches and regular practice. I think we will be fine. We have a tough match coming up, and we will have to be there, mentally and physically.”