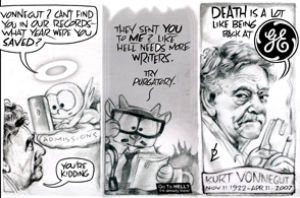 After Allen Ginsberg’s death in 1997, Kurt Vonnegut wrote this in a speech given to honor his fellow poet and friend: “Please, please, please. Nobody else die!”

Though this was clearly a genuine entreaty, it was also an attempt at being humorous in the face of a devastating loss.

Vonnegut was a funny man, after all.

Since April, fans of the author have been dealing with their own feelings of loss. Vonnegut died April 11, after sustaining severe injuries from a fall. He died quietly in one of the loudest American cities in existence – Manhattan, N.Y. In many ways, Vonnegut was like this bustling city – larger than life, tireless, unabashedly vocal in his opinions.

In a 2005 interview, Vonnegut is reputed to have said of suicide terrorists, “I regard them as very brave people. They are dying for their own self-respect … It is sweet and noble – sweet and honorable I guess it is – to die for what you believe in.”

Of Bush he is said to have made references to a former, equally unpopular president saying, “Honestly, I wish Nixon were president. Bush is so ignorant.” Vonnegut could also be very controversial.

But he was a man of deep principle when it came to his beliefs, one of which was a strong belief in human equality. Throughout his life, Vonnegut was heavily involved in the humanist movement, even serving as Honorary President of the American Humanist Association.

Vonnegut’s early years were spent in Indianapolis with a father who was often out of work during the depression and a mother who was blatantly unstable more often than not. She would eventually commit suicide in 1944.

Vonnegut attended Cornell University, where he studied biochemistry and worked as an editor for the Cornell Daily Sun. He would later enlist in the U.S. Army and it was during this time the seeds were planted for one of his most famous novels, “Slaughterhouse-Five.” Vonnegut spent much of his time during World War II as a prisoner of war in Dresden, Germany. His experiences there would come to be the story and the place where he was imprisoned – a meat locker called Slaughterhouse Five – would be the title of the highly-praised autobiographical work.

He always pushed the boundaries in his work by utilizing plot devices such as time travel and the genre of science fiction to illustrate otherwise more reality-based storylines. Though this writing style would be embraced by many, it would also be highly criticized throughout Vonnegut’s career for being incoherent and rather silly as novels go.

Vonnegut was not a man to take criticism seriously and so he survived the rest of his 84 years with trademark humor and wit.

Though he has and will be missed by those who appreciate the man behind such works as “Cat’s Cradle” and the most recent 2005 work “A Man Without A Country,” it’s a safe bet to assume Vonnegut wouldn’t want anyone crying over him. As the final line in a Vonnegut-penned speech given posthumously by his son at a recent honoring ceremony goes, “I thank you for your attention and I’m outta here.”

3. Book inspired by Vonnegut: “Venus on the Half-Shell,” a 1974 work by Philip Jose’ Farmer

5. Famous Vonnegut quote: “Laughter and tears are both responses to frustration and exhaustion. I myself prefer to laugh since there is less cleaning up to do afterward.”