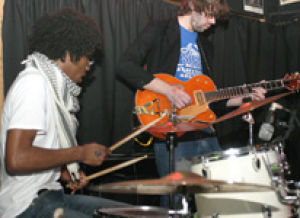 There’s a certain rivalry going on between a seasoned Topeka band and one that is fairly new.

“We’ve got a beef with Kennedy [Luck Club],” joked Marty Hillard, guitarist and vocalist for Jen Say Kwah. “We’ve got a rivalry. Think of it on a level with the Beatles and the Beach Boys.”

I’m sitting in a parked car and the rain is pounding on the roof. I’m having a little conversation with the members of new band Jen Say Kwah, right after their first performance at the Boobie Trap. Their post-performance excitement is as palpable as the rising humidity.

“It was wonderful that so many people came out,” he said. “So many of our good friends actually showed up.”

“There was a point where I was playing a lot and I just didn’t enjoy what I was doing,” remembered Hillard. “I had been in and out of so many bands that I had gotten jaded.”

Coming together to form Jen Say Kwah, an event that was finalized with the addition of Canty about five months ago, has been the ultimate turnaround for Hillard’s state of mind when it comes to being in a band.

“Once we started playing and getting the ball rolling, it was really satisfying in a way it hadn’t been for a long time,” said Hillard.

Perhaps this might have something to do with the music itself. The sound of Jen Say Kwah is a fusion of pop, indie music, melancholy guitar and a little bit of dance thrown in. On paper the sound might seem strange but in a live music venue, especially one as small and non-ventilated as the Trap, it’s loud and mind-bending and awesomely overwhelming – in short it’s just the thing most people are looking for in their rock concerts. The members give a lot of credit for this to Canty. His dance beats, which he bangs out with uninhibited ferocity, bring some cohesiveness to the music.

“Jeff and Marty write songs between them and, since they both have a different sound, my job as a drummer is to apply some sort of continuity between the two,” said Canty, “Because it’s hard to find a middle ground. Marty writes some sadder songs and Jeff has a tendency to write poppier tunes so I try to find a common ground in all of our material.”

“The only thing we’re interested in as a band is the things we can control,” said Hillard. “Like writing better music and just spending more time with each other and learning about each other and trying to figure out a way to express that through our songs. And look for those opportunities that a lot of bands pass up.”

Some of them just want to play music. In Canty’s own words:

“I just like to play the drums and shit.”