‘Land of Women’ a serious and entertaining package 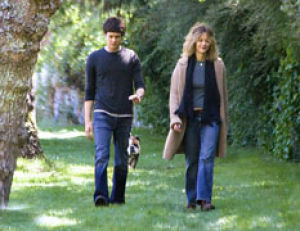 Every once in a while, a movie comes along that really makes you ponder the important things in life: love, family, friendship… wearing pants when you answer the door.

One such movie is “In the Land of Women,” a romantic comedy starring Adam Brody and Meg Ryan. Brody plays Carter Webb, a love-struck young writer from L.A. who goes to Michigan to visit his “dying” grandmother after his beloved girlfriend Sophia breaks up with him.

While in Michigan, Webb plans to take time off from his job as a scriptwriter in the adult film industry to start work on a book about his old high school in L.A. Shortly after his arrival, however, he meets up with his grandmother’s neighbor Sarah Hardwicke.

Sarah, who just learned she may have breast cancer, befriends the visitor and introduces him to her daughter Lucy, who is played by Kristen Stewart. Webb begins to fall for Sarah, who admits to Webb that her husband cheats on her. All the while, Lucy falls for Webb because he is older and mysterious.

While the movie has a serious side, it also does a good job of entertaining and providing laughs. Webb’s grandmother Phyllis, played by Olympia Dukakis, is one of the more interesting characters in the movie. Phyllis is a hypochondriac and believes she is near death, despite what the doctors say. She brings a whole new meaning to the phrase “live like you were dying.”

It was interesting to see Brody’s character develop so much throughout the movie. At the beginning, all he really cared about was his model girlfriend Sophia. After the breakup, he basically gives up on love and in an attempt to get his life together ,decides to go take care of his grandma.

Throughout the movie, he gains a new perspective on life and love from his conversations with Sarah and Lucy, and develops a new appreciation for what is really important in life. Towards the end of the movie, he has another chance to be with Sophia but turns it down. It just shows how much he matures during the movie.

Lucy was also an interesting character, because while she obviously loved her mom and cared about her, she also had a lot of anger towards Sarah for letting her husband cheat on her. She is a very deep character, and Stewart does an excellent job of portraying that.

All in all, this was one of the better movies of the year. While it is definitely a “chick flick” kind of movie, it has enough humor to keep everyone interested and has a great message about family