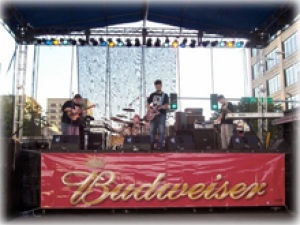 From its humble beginnings as a student band at Seaman High School to its recent show opening for rock legend Eddie Money, The Yard Art Project has managed to make a name for itself in Topeka.

The band mostly plays locally and will be playing at the Static Bar May 19, but its members hope to make themselves known on a more national scale as they plan TO tour this June throughout the Midwest. They will be playing at locations in Colorado, Oklahoma and Texas.

The YAP will also be playing at the KONZA Music Festival at Rusty’s in Manhattan. The band is set to kick off its show at 9 p.m.

With the release of its new CD, “Favorite Regret”, it is apparent how much the YAP has matured since their first CD was released in 2005. Zach Johnson, who plays guitar and lead vocals, described their music as “modern, almost progressive rock.”

One of the newest additions to the band is bassist Jon Chinn, who joined the band after previous bassist Jeremy Albert left. Chinn goes to Kansas State University with keyboardist Chris Maxwell, and was recruited through a friend.

“Jon is actually a guitar player and Chris asked him if he could play the bass and he picked it up and was pretty much just awesome at it,” Johnson said. “Within like three days he had all of our songs down, so we were like ‘You’re in’.”

Currently the band is writing new songs in addition to its touring schedule, including a song that Maxwell said “is our best song yet.” While the song is still in the early stages of creation, Maxwell said the song would get people pumped up when they heard it.

“Favorite Regret” can be purchased at cdbaby.com and the individual songs can be downloaded from digstation.com and soon from iTunes. The Yard Art Project can also be found at www.myspace.com/yardartproject.

“We’ve just built up this chemistry that, either writing music or offstage, we always know what the other guy is going to do,” Johnson said. “Jon just fits right in. You wouldn’t know he hasn’t been playing with us for more than a month or two.”