Navone has final WU exhibit, but not dead yet 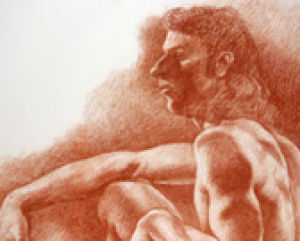 “Ed Navone, Celebrating 43 Years of Art” went up at the Mulvane Art Museum April 14. The exhibit of the retiring Washburn professor’s works will run until June 3.

“Well, I don’t know that this will be my last exhibit. I’m not dead yet,” said Navone.

In the past, retired faculty have contributed to collections for the gallery and Navone said he plans to spend a lot of his time at home on his art.

“People reach a point where they know what they have to do with the rest of their life and I’m lucky enough to be an artist and work with wonderful students,” said Navone. “But after you’ve taught the same thing for 40 years it becomes hard to reinvent. I have pieces at home I need to work on before I lose my mind.”

Navone won’t completely disappear from Washburn after his retirement. He plans to volunteer here and work with students on art.

Navone’s pieces for his exhibit are a collection of figure drawing, more modern works, silverpoint and his first piece he did at Washburn.

The Silverpoint pictures are interesting. They almost look pencil drawn, but something’s a little bit different.

Navone’s silverpoints were done with a piece of silver wire. The silver wire replaces the regular drawing tool and the surface is coated with chalk and rabbit skin glue. It’s an old technique, used by Leonardo Di Vinci in the past, but hardly used in the present.

Although, Navone, “loves all his children the same,” he does have one piece up in his exhibit that has a special history.

“In Memoriam: Andrew Goodman, Michael Schwemer, James Earl Chaney” was done in 1965. It was developed by the story of the three men who were helping black people register to vote when the Ku Klux Klan killed them.

It’s a dark painting, slightly disturbing to look at. Still, it draws in the attention of a spectator time and again. The thickly laid paint sticks out against the surface, the shadowy, skeletal shapes of men that stand in foreground and the predominance of the middle figure chest, which has a rock placed underneath it add to it’s eerie charm.

“Even in death, they’re still standing for what they believe in,” Navone said.

The painting was bought as a retirement present in 1965 for a Washburn professor. It was hung up on the walls at first, but later removed by one of the presidents. The work was placed in the basement to be abused by spider webs, dust and other objects in storage with it.

“It was curved and caved in. It had been hit from behind,” said Navone.

But when it was found the museum asked Navone to fix it and, once again, it went into the view of the public.

“It’s really gratifying if you’ve ever had a piece censored to see it up,” said Navone.

Navone’s other pieces may not have as interesting of a story behind them, but the exhibit is filled with amazing works.

There are a couple of pieces that have ropes on them that have been painted over and attached to the canvas. It’s an interesting texture and allows for a three-dimensional element.

“This selection was a parenthesis of my work here at Washburn,” said Navone.