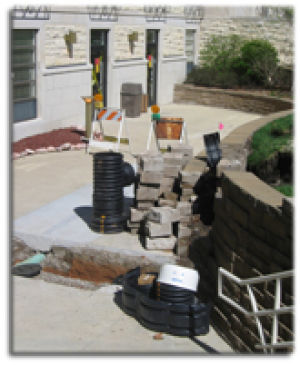 Construction has begun on the Union lawn in an effort to keep the Memorial Union from turning in to the next water-feature on campus.

Addressed in 2004, the issue became a major concern when the lower-level of the Union flooded, making it apparent that something needed to be done. The main cause for delay in the project was design, as it was a difficult task to create because of how low the structure sits, said Ed Wiss, assistant director of maintenance and facilities services.

While the bright-orange fences and grinding construction equipment may be hard for some students and faculty to ignore, it will simply be something to work around. Wiss said they do not plan to close both sidewalks running through the construction area, so it should not impact students too much.

Wiss said weather permitting, the project should be completed within the next three to four weeks. If inclement weather becomes the trend, though, the construction could be around past the middle of May.