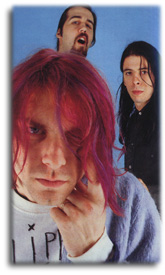 The anniversary of Kurt Cobain’s death by suicide, is coming up on the fifth of April. The lead singer of Nirvana was perhaps best known for writing and singing the lyrics to some of the best known grunge rock anthems, such as “Come as You Are,” “Lithium,” and “Smells Like Teen Spirit.”

According to Michael Azerrad, who published “Come as you are: The Story of Nirvana,” Cobain took an interest in music at the age of 14 when he received a guitar as a birthday gift from his uncle. He started learning songs from ACDC and The Cars, which inspired him to work on songs of his own. Cobain formed a band consisting of Dave Noveselic, a fan of punk rock who lived across the street from Cobain, and Chad Channing, a drummer. They named their band Nirvana. Cobain and Novselic recorded their first album, “Bleach,” with Channing. However, Cobain was not happy with Channing’s style so he recruited Dave Grohl, a drummer who led Nirvana to produce the major debut album, “Nevermind.”

In 1991, Cobain became interested in Courtney Love, who was from the band Hole. They had an on-again, off- again relationship. Cobain and Love began spending more and more time together which built a strong relationship and mutual connection through drug use. In 1992, Cobain found out that Love was pregnant with his child, so he married her in Hawaii. They named their daughter Frances Bean Cobain after Frances McKee and the Vaseline’s, whom Cobain was a huge fan.

According to Azerrad, Cobain dealt with depression and drug addiction throughout his life. At the age of 19, he had a drug addiction to Percodan, an opioid pain killer and by the time he was 22, he was addicted to heroin. His addiction to heroin led to him passing out randomly during events, such as photo shoots, and he even overdosed before a show. As his addiction spiraled out of control, Love held an intervention with some of Cobain’s closest friends. He eventually agreed to entering a detox program in 1994 but, after being there for only one day, he jumped a fence and left.

Though he has been dead for more than 10 years now, fans of Nirvana believe he is still worth remembering.

“Hell yeah he is,” said Washburn student Jake Starr. “I think he was a great artist. I think he succumbed to what many other artists have succumbed to like depression and drugs. The music he wrote is worth remembering him for.”