Ferrell at his best in ‘Blades’ 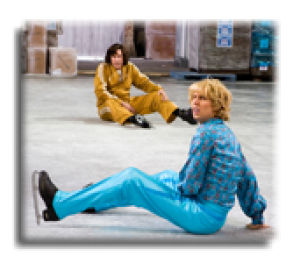 The hottest ticket at the box office right now is “Blades of Glory,” the comedy-on-ice starring Will Ferrell and John Heder. This jewel tells the story of two world-class figure skaters that knock heads at the world championship, and manage to get themselves in big trouble with skating’s sanctioning body.

John Heder, as the sensitive Jimmy MacElroy, channels a character somewhere between Brian Boitano and Scott Hamilton (both of whom appear in the movie). Heder’s Jimmy is a great anti-chick magnet to Ferrell’s slimy seducer. Jimmy’s limp-wristed stalker Hector and sequined turquoise costumes are sure to chill. Look for Heder’s love match with the voluptuous Jenna Fischer of “The Office.”

The film’s strength is in its solid characters and easy-to-follow plot line. Because of the near omnipresence of skating on television these days, the audience needs little help recognizing and understanding what unfolds. The fun is in the weird twists, like the semi-incestuous Van Waldenbergs siblings, played to a razor’s edge by real-life mates Amy Poehler and Will Arnett. The pair’s wacky on-ice antics and gangsta costumes are hoot-worthy.

Chazz and Jimmy are forced to “pair” up in order to keep skating. Their coach, played by “Coach” Craig T. Nelson, has a sure-fire plan to get them the gold. Let’s just say it will “drop some jaws,” and could win the duo a place in pairs history. The skating sequences are nicely done, with the actors getting in some real blade time, along with some cheesy but fun blue screens. The sprinkling of famous skaters throughout the movie also adds a nice touch to the story. A chase on the frozen river, ala’ Hans Brinker through Montreal, is a nice way to bring the story to a peak.

So, get the crew together, put on a warm sweater and glide on out to the multiplex and enjoy “Blades of Glory.”