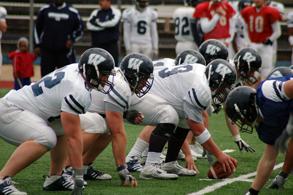 Face-to-face The Ichabods faced off against their own teammates in a scrimmage Saturday afternoon at Yager Stadium as a wrap-up to the spring practices. Nearly 400 fans were present to watch the Washburn offense and defense square off.

Washburn football this past year was on top of the world prior to the start of the season, coming off an MIAA championship and first-ever NCAA playoff berth. The Bods were dreaming of a national championship.

Unfortunately that’s all it was, a dream, because fate would take its twisted toll on the Bods throughout the season. Maybe it was that wild 16-13 defeated trip to Western Washington or perhaps when their junior leader and quarterback Jordan Brill went down with a shoulder injury halfway through the season, but the fact is the Bods finished the year 7-4 with no playoff berth or postseason bowl bid.

“This past season is definitely motivation,” said Jake Lebahn, senior wide out. “Two years ago we were MIAA champions and looking forward to the playoffs last year but that didn’t work out. Our team is very optimistic this year, and has a lot coming back. If we can stay healthy, I think this team can be very dangerous.”

The Bods scrimmaged this past Saturday to give a little preview for what is to come this fall when they play their home opener against Chadron State on Aug. 25. But mostly, according to Craig Schurig, head football coach, to become a smarter football team, which has become a theme throughout spring workouts.

“Last year one of our weaknesses, we felt like we were a big physical hard-hitting team and we felt any team we went up against we were the more physical team, but we were not the smarter team at times,” said Schurig. “We made silly mistakes and we cost ourselves. So one of our big emphases this spring is to play smarter. Cut down on penalties, not have stupid penalties, not have blown assignments. We’re coming around that way.”

But when you can be more physical than any team in the country on any given day, the seniors lost on that team will be hard to replace and no position may be so prevalent as that of defensive line with having to replace a guy like All-American and pro hopeful Trey Lewis. The Bods are relying on younger guys to step up and fill the spot.

“Brandon Jackson and Ben Biancho at defensive tackle have had a really good spring,” said Schurig. “They look solid and they’re going to be some of the better defensive tackles in the conference.”

It will help ease the transition when you have one of the top linebacker cores in the nation returning as your second line of defense. The Bods only lose one member of the core to graduation in Mike Gonzales.

“The strength of our defense should be at linebacker,” said Schurig. “Those guys are really playing well and I see our linebacker core being some of the best in the country.”

The Bods’ offense is shaping up as well, even absent two of their most productive wide receivers, Sam Sissom and Aaron Gardner.

“On offense we kind of struggled a little bit,” said Lebahn. “But we’re hoping with the quarterbacks, wide receivers and running backs this summer we’ll get together and have a great summer workout like we did last year and have a good opening game against Chadron.”

With Brill still recovering from shoulder surgery, who according to Schurig, is on pace to be healthy come fall, Beau Wofford and Jake Iverson have been taking the majority of the repetitions this spring.

No matter what takes place though, Schurig explains the Bods will be successful as long as they maintain faith in the program and stay focused during summer training.

“I think we are confident in our program with the success we’ve had the last few years,” said Schurig. “We ended this past season well, we had some key injuries at key positions, early.

“I think we feel like we can pick up where we left off last season. I think our guys know what it takes to be successful in this conference. They know what they have to do over the summer training wise.”