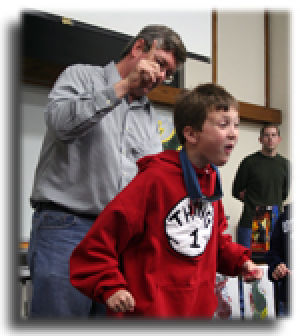 Last Friday and Saturday, the Godzilla and Friends Festival II was held at Washburn University in Henderson 112.

This was the second year for the event and included the viewing of “Gamera, Guardian of the Universe,” “Prince of Space,” “Gorgo,” “Godzilla Tokyo S.O.S” and many more. The festival featured presentations from William Tsutsui, professor from Kansas University Center for East Asia Studies and author of “Godzilla on My Mind: Fifty Years of the King of Monsters.” The event also included several commentaries, a “Roar like Godzilla” contest and giveaways.

According to Bill Shaffer, KTWU producer, the festival attracted twice as many people as last year. He also said there was a good mix of both adults and kids that attended.

Shaffer said he thought Godzilla was a big part of our past and culture because of the fascination people have with a guy in a monster suit stomping around Japan.

“People have a kind of nostalgia for that goofiness,” said Shaffer.

Tsutsui said he has been interested in Godzilla since he was eight or nine years old.

“Godzilla’s just cool!” said Tsutsui. “Who doesn’t like Godzilla, a fire-breathing dragon that walks around cities?”

According to Tsutsui, the two goals of the festival were for families to have a nice day out enjoying sci-fi films and have fun with their kids. Also, he wanted people to think about the films and reveal things to them about Japanese society.

“I think it pops our pride to see a monster destroy monuments,” said Tsutsui. “And I think that’s good.”