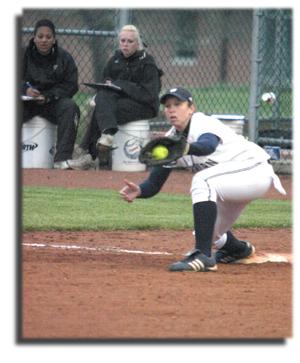 Making the play Dani White, sophomore first baseman, makes the catch against Emporia State at Hummer Sports Park. The Lady Blues were unable to hold off the Hornets, falling 2-0 in the first game and 8-5 in the second due partly to the six errors made in the doubleheader. The Lady Blues hope to cut down their errors Tuesday against Pittsburg State.

The weather was finally nice enough for the Lady Blues softball team to return to action, but Emporia won both games of a doubleheader Thursday at Hummer Sports Park.

Washburn lost the first game 2-0 while being held to one hit against Emporia ace Courtney Reed. Reed, who entered the game with an MIAA best 17-3 record and a 1.23 earned run average, carried a no hitter into the sixth inning before junior Malarie Fellers doubled to center field.

The Lady Blues had only five base runners in the game, and struck out nine times against Reed and the sixth-ranked Hornets. Emporia’s Megan Davison singled in the second inning and pinch runner Linda Ketter advanced to third base on an error. Morgan Viola drove her home with a hit to right field.

Davison came through again in her next at bat by hitting a solo home run in the fourth inning. She was intentionally walked in the seventh inning, and finished the game 2 for 2. Washburn pitcher Kelly Swygert pitched a complete game while giving up just one earned run, but Reed, Davison and four Washburn errors made it difficult for the Lady Blues to challenge Emporia in game one.

Due to rainy and cold weather, the game was the first Washburn was able to play since March 29. Before the long layoff, the Lady Blues had won four conference games in a row and were off to a hot start in the MIAA. With the two losses, the team falls to 19-14, and 5-3 in the conference.

“Being off three weeks and losing hurts, but you’ve got to bounce back,” said Lisa Carey, head softball coach.

The Lady Blues started and finished strong in the second game, but they still came up short, losing 8-5. Washburn’s offense was much improved in the first inning of game two. A triple by junior Mandy Tarbutton drove in Fellers and shortstop Brooke DeVader, giving Washburn an early 2-0 lead.

However, Emporia countered with a five-run third inning, which was set up by another Washburn error and an inside the park three-run home run by Hornets senior Morgan Viola. Errors again played a big part in Emporia’s success.

Washburn starting pitcher Kayla Long was replaced by Swygert after Emporia’s five-run inning, but because of the error, only two of the Hornets’ runs were charged to Long. Emporia built up a six-run lead after scoring all eight of its runs between the third and fifth innings.

The Lady Blues made the game interesting in the last half inning, with runs scored by Fellers, Whitney Tapp and Jessie Batres, but their most productive inning of the night was not enough for Washburn to come back from the large deficit. Tish Williams stole third base after batting two runs in, but Reed entered the game and shut down the Lady Blues for a second time, getting the final two outs to pick up her first save of the season.

“We have to step up and do better. If you want to be a championship team, you have to beat teams like that and find a way to get the job done,” said Carey.

The late spark in game two did give reason for optimism later in the season, when the weather is not so cold and the gap between games is not so long.

“I’m just glad we were able to play,” said Carey. “We scored a few runs at the end. Hopefully we can beat Pitt next week.”

The Lady Blues take on Pittsburg State in a 3 p.m. matchup Tuesday in Pittsburg, Kan.