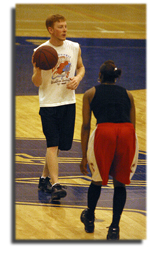 However, the $5 per person entry fee did not garner much interest, so a few male students played a series of 5-on-5 games against the Lady Blues basketball team.

“It was a physical game – very tiring,” said Anthony Ditch, senior sports management major who played the entirety of the games. “They are a pretty good team. They are in good shape and very agressive.”

Games went to 11 points by one and two-point baskets – enough to tire the guys out.

“Especially after that first game, I was dead,” said Ditch.

Despite the exhausting and physical nature of the game, it was no more than a fun pick-up game worth doing again.