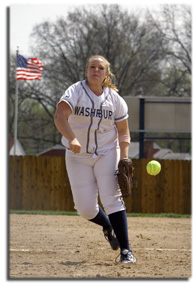 Swygert was dominant on the mound tossing a perfect game last Wednesday against the Southwest Baptist University Bearcats in Topeka. The Lady Blues defeated the Bearcats 8-0 in five innings.

“I was a little nervous and thought I was going to walk the last batter, but I got lucky,” said Swygert. “Brooke [DeVader] made a great play at the end to save the perfect game. She took a lot of pressure off of me and made my job easier.”

Washburn jumped out to a quick 3-0 lead after sophomore Dani White crushed a three-run home run to left field. The Lady Blues tacked on another run to take a 4-0 lead after one inning. Lady Blues freshman third baseman Tish Williams, who leads the MIAA in batting average (.489), led off the bottom of the third inning with a single to center field. Washburn’s bats stayed hot that inning as they scored four more runs to take an 8-0 lead.

“Tish is a stud, she’s a gamer,” said Lisa Carey, Washburn head softball coach. “They walked Tish a couple times, then Brooke [DeVader] made her pay, then Dani White comes up and hits a bomb [in the first game], so it was a good outing today.”

Swygert’s perfect game was in jeopardy with two outs in the top of the fifth inning. For the first time in the game Swygert fell behind in a count. With the count full, Bearcats left fielder Alisa Klingenberg hit a sharp grounder to Lady Blues junior shortstop Brooke DeVader. DeVader made a nice defensive play and throw, barely beating the runner at first base. Swygert improved her record to 5-6 on the season. DeVader was 3 for 3 with one RBI, and Williams was 2 for 3.

“Kelly [Swygert] came out on fire,” said Carey. “She a had a couple of days off; good rest. She kept the ball down and worked ahead in the count, and got the job done. I’m very proud of her, she stepped up today.”

In the second game of the doubleheader, the Lady Blues won 3-2. Kayla Long, Washburn freshman pitcher, picked up the win, improving her record to 4-2 on the year. Long went seven innings, striking out six. DeVader was 2 for 3 with an RBI.

“Today was nice, we looked a lot better, we were a lot more comfortable, the pitchers stepped up and got the job done,” said Carey. “There’s not really a weak hole in our line-up right now. One through nine right now is capable of putting the ball over the fence. Our offense came alive in the first game and set the tone for the day, and our defense played outstanding.”

Later in the week, Washburn swept Missouri Southern (3-2, 3-0) to improve its record to 19-12 overall, and 5-1 in the MIAA. The Lady Blues are in action next week when they play road games against Truman State University and the University of Central Missouri.