When a man was a martyr 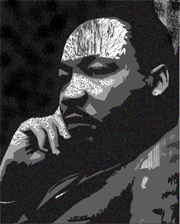 The date was April 4. The year was 1968. The man became a martyr for racial equality and human dignity.

Rev. Martin Luther King, Jr. lives on the legacy of those who continue to work toward the elimination of racism. Thirty nine years ago last week, his legacy was cut short.

He was born at noon Jan. 15, 1929 in Atlanta, Ga. King entered college without having finished high school, an impressive feat.

One of his most eloquent and remembered writings came out of his imprisonment in Birmingham, Ala. because of the sit-ins and demonstrations to protest the segregation in restaurants.

They had started peacefully, but when the protesters refused to move, the police apparently weren’t happy. The atrocity of the officers was spread across the media. Many protesters were arrested including children. K-9 units were brought out to keep those came later at bay.

It was April 12 when a group of eight members of the clergy from Alabama placed “A Call to Unity,” an ad in a local paper. In it they expressed their thoughts that racial injustice should be corrected in court and not in the streets and called King a troublemaker.

King wrote his letter in the margins of the paper and continued it on the toilet paper available to him.

“In your statement you assert that our actions, even though peaceful, must be condemned because they precipitate violence…. Isn’t this like condemning Socrates because his unswerving commitment to truth and his philosophical inquiries precipitated the act by the misguided populace in which they made him drink hemlock? Isn’t this like condemning Jesus because his unique God-consciousness and never-ceasing devotion to God’s will precipitated the evil act of crucifixion?” he asked in his “Letter From a Birmingham Jail.”

From this letter, the doctine to disobey unjust authority and law was once again ignited in the public psyche.

King continued his crusade until April of 1968 when he was shot on the balcony of the Lorraine Motel in Memphis.