The Academy Is… makes music for Fall Out Boy to envy 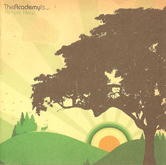 As I skimmed through the CD section at Wal-Mart one night, I found myself lacking inspiration. Somewhere between Fallout Boy and Hawthorne Heights I had come to the painful realization that today’s rock just doesn’t match up to the great music of the ’70s. Yet, a glimmer of hope had arisen.

A lone CD cover caught my eye, misplaced among the bleated punk and emo albums. I picked it up and read the name of the band: The Academy Is… Immediately intrigued as to what the academy was I decided that the CD, “Almost Here”, was the one for me.

I made my purchase and headed out to my truck, examining the retro CD cover and imagining what strange sounds might come from the disc inside. Opening the door, I was surprised to see that a group of elderly people, which had pulled up beside me when I entered the store, were still in their vehicle. They would later come into play.

I popped the disc into my CD player and turned up the volume, expecting to hear some acoustical ballad about butterflies and sunflowers. What came out of my speakers both surprised and terrified me: punk rock.

I was hesitant at first, expecting to hear some whiney singer complain about how horrible his life was. However, as the bass kicked in and the elderly folks next to me fled their car like a Chinese fire drill, I realized this band was different. This is the music Fallout Boy wishes they could play.

The singer was good, the guitar was mellow, the bass was booming and the drummer threw down some sweet beats. Word. Unlike the shrieking lines of Hawthorne Heights and the mindless drivel that Fallout Boy considers lyrics, you could actually understand what was being sung.

Each of the songs seems to focus on different relationships in the lives of the band members, whether it be friends or past lovers. One of the better songs on the CD was “Slow Down,” a song about a promiscuous girl that “kisses like an overdramatic actor who’s starving for work.” It uses comical metaphors, comparing their relationship to a low-budget film with a dreadful script.

Another song, “Black Mamba”, seems to summarize the group’s attitude towards today’s trendy music scene, and how they set out to differ themselves from those bands. One of the lines in particular seems to go out to critics of their music.

“When they review the debut what if the critics hate you? Don’t worry ’cause we might just catch somebody off their feet.”

Well, it worked. They caught me off my feet.