‘Step It Up’ brings attention to emissions 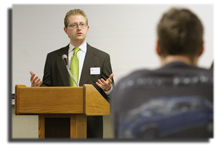 Concerned Kansans joined together for a rally at Washburn, hoping to send a message to Congress that the issue of global warming needs to be addressed and carbon emissions must be reduced.

“Step It Up Congress! Cut Carbon 80% by 2050!” is part of the nationwide Step It Up campaign. Over 1400 events took place across the country Saturday, including the local gathering at Petro Allied Health Center.

“We hope to educate the Topeka community and spread the word to other members of the community,” said Lee Boyd, biology department chair.

Those who attended the rally shared ideas about how alternative forms of energy can be used to slow the effects of global warming. Jason Fizell, the Second District Manager for Nancy Boyda, spoke about what Boyda has done during her time in office to help save energy.

“Cutting carbon use by 80 percent by 2050 is something she has been very supportive of,” said Fizell.

Boyda has voted in support of energy reducing bills that help the country as a whole, but she has also made sure that Kansas’ regional concerns are addressed by Congress.

With an abundance of wind in Kansas, harnessing that energy would help locally. However, scenic areas like the Flint Hills and Southeastern Kansas, where the wind is not as strong, would not benefit by having a lot of energy saving windmills, said Fizell.

There are easier, more cost effective ways the government, and everyone else, can take care of global warming’s problems.

“[Boyda] walks to work, and bikes whenever she can. She’s doing her part to use less fuel,” said Fizell. “As we replace bulbs in government buildings, we use lower energy bulbs. It’s not the end-all solution but it is a step in the right direction.”

Attendees also discussed what they could do to help the cause.

“Decentralizing energy with wind and solar power would be just as effective as using nuclear energy, and it would be usable quicker,” said Michael Mahoney, an attendee of the rally.

The concensus was that energy can easily be conserved, whether it be something simple like drinking tap water rather than bottled or going a step further by using solar energy to power homes.

“As a sign by one of our biology club members says, ‘Good planets are hard to find.’ This is our planet and it’s a lovely place. We need to take care of it and protect it,” said Boyd.