The Washburn Review • May 6, 2007 • https://washburnreview.org/21201/uncategorized/ichabod-drafted-by-atlanta-falcons/ 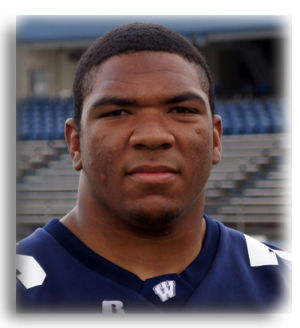 Not taking into account previous attributes, being drafted to the NFL is like winning the lottery. But for Wasburn defensive tackle Trey Lewis, being drafted just meant it was time to go back to work.

“I probably would take the time to enjoy the reality of being drafted, but I’m not going to. I have to finish up classes and then immediately get ready to go,” said Lewis. “I kind of enjoyed the night of, but the next day I was back to business.”

The Atlanta Falcons drafted Lewis in round six, with the 185th overall pick. Lewis was the first of four selections the Falcons had in the sixth round. The Falcons were in need at the defensive tackle position as starter Rod Coleman is expected to be out at least five months after rupturing his right quadriceps in a boating accident.

“I know I’ve heard them on the radio talking about contract issues with some of their defensive tackles,” said Lewis. “I just have to get myself ready and get familiar with the playbook, that way if they are in need I’m ready.”

The Falcons have already assigned three-year veteran Jonathan Babineaux to take over for Coleman. However, the Falcons have not pursued any other defensive tackle veteran in free agency, and one of the other two veterans, Grady Jackson, has not participated in off-season workouts due to conflicts of interest in contract negotiations.

But Lewis is focused on making the team before worrying about playing time. Lewis finishes classes this week and leaves for Atlanta on Thursday for rookie mini-camp.

“It was a huge relief to get drafted but I know I still have to make the team and there is a lot of work ahead,” said Lewis.

Lewis was just of one of two players from the MIAA to be selected through the draft. Joining Lewis is Missouri Southern offensive tackle Allen Barbre, who was selected in the fourth round by the Green Bay Packers.

Others are joining NFL teams through free agency, including Washburn defensive back Fletcher Terrell. Terrell is actively working to land a spot with the Jacksonville Jaguars. Unfortunately, the Jaguars have reached a contract agreement with 8 undrafted rookies so far, but Terrell isn’t one of

If both players were to make their prospective teams, Lewis and Terrell would be facing each other on opposing sidelines for the first time Sept. 16, as the Jaguars host the Falcons. But no matter what happens, these two players have given Washburn football a name and an avenue for NFL scouts to come back for years to come.

“Washburn is set up to make you a successful player,” said Lewis. “The coaching staff is great. They not only prepare you for the next game but also your future. I’m sure me making it makes Coach Schurig’s job of getting scouts to come a lot easier.”