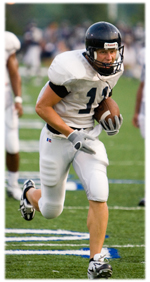 No preseason warm-ups, playoff match-ups are happening in August.

The No. 24 Washburn football team opens this Saturday against the No. 5 Chardon State Eagles.

“Our week one is the toughest one in the country,” said head coach Craig Schurig. “It’s a playoff match-up. We have our work cut out for us.”

“I hope our whole defense is ready,” said Schurig. “He is awfully good, and elusive and very fast, and it will take all 11 guys to corral him. That is the biggest thing you want to do. You want to corral him and not let him get any big bursts on you. Make him earn everything.”

The Bods defense will have to corral Woodhead without graduated run stoppers, defensive tackles Trey Lewis and Roy Simms. Sophomores Brandon Jackson and Ben Bianchino will fill their roles Saturday.

But the defensive line wasn’t the only area affected by graduation. In the secondary, senior Carey Williams moves over to the right corner to take over for All-American Fletcher Terrell.

“Of course those players were huge for us,” said Zach Watkins, sophomore linebacker. “We have other guys to step in and play and really take over where those guys left off.”

“I think a pretty good goal for this team is to take it one week at a time,” said Jordan Brill, senior quarterback. “Injuries happen, other things happen that you can’t control. I think if we concentrate on what we have going on we will be in a pretty good position.”

Brill will make his first start Saturday since his season ended prematurely last year during the Pittsburgh State game Oct. 7, tapping out to a shoulder injury that occurred during preseason camp.

“It should just be a natural transition,” said Brill. “If it was a big injury where I actually got hurt in the game, maybe I’d be a bit shaky, but I was playing through the injury. Once I step back out there I should be my calm, cool, collected self again.”

“I’m very excited about opening weekend,” said Brill. “Coach Schurig did a great job going out and bringing in a good team like Chardon State. That is exciting in itself. Everybody seems to be motivated throughout camp; everybody seems to be in high spirits about it. Now it’s just a matter of if they can come through and what we can do to execute.”