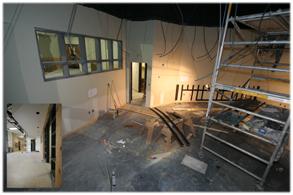 What started as a brainstorm of ideas in the summer of 2006 is soon to be a completed reality. After only breaking ground in June, the Washburn School of Business is set to open the Business Technology Center in October. David Sollars, dean and professor of the Washburn School of Business, believes that the new suite will fulfill the school’s need for an up-to-date business and technology environment.

“We wanted something with all the bells and whistles that looked nice and attracted good students,” said Sollars.

Located near the northeast entrance to the Henderson Learning Resource Center, the suite is comprised of a trading simulation room, a multi-media technology classroom and a modern corporate boardroom. Funded donations from alumni and friends covered $450,000 of the technology center’s $500,000 construction cost.

“We are still working out a plan to cover the remaining cost,” said Sollars.

The three areas of the Business Technology Center will each be named in honor of specific donors to the project.

Visible from the lobby, the Chandler Boardroom, which is named after Andrew Chandler, CEO of Fidelity State Bank, will display photographs of School of Business Alumni Fellows as well as major donors.

“The business school needed a place of honor, distinction and importance,” said Sollars. “The boardroom will be a space for nicely attired conferences and seminars.”

The Don Wright-Robert Gustavson Technology Classroom will come equipped with dual screen multi-media technology, power ports for laptop computers and wireless access to the network. The space received an anonymous donation from a Washburn alumni couple and is named in honor of two of the couple’s favorite former professors. Sollars believes the classroom will serve as a place to teach finance classes dealing with marketing and technology.

Designed to resemble a professional trading environment, the Mayo Schmidt Finance lab will be visible from the both the boardroom and the technology classroom. The space is named in honor of Mayo Schmidt, who helped fund the finance lab. Schmidt is a Washburn graduate and now serves as the CEO of Saskatchewan Wheat Pool, a Canadian-based agricultural business.

“The lab is designed to give students a more ‘real world’ educational experience,” said Sollars. “Rise Softool tickers and LCDs will provide students with current market information and enhance the environment.”

Robert Weigand, professor of finance, believes the new addition to the business school will give Washburn business graduates a leg up when it comes to landing a job.

“Not only will the feature tools in the technology center be a nice line on a student’s resume, but the professionalism that is demanded of them will build their confidence,” said Weigand.

Because the suite is intended for use by the MBA students as well as upper division undergraduate students, Weigand thinks that students will work harder to be among those selected and given the privilege to use the facility.

Sollars biggest hope is that the Business Technology Center will bring Washburn into the future. With the business school’s recent inclusion in the 2008 edition of the Princeton Review’s “Best 290 Business Schools” in the nation as well as its Association to Advance Collegiate Schools of Business accreditation two years ago, he believes that the program is heading in the right direction.

“By dressing up the outside, hopefully we will attract an even better quality of students to the inside,” said Sollars.