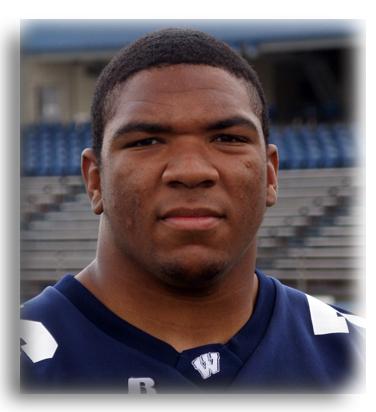 Lewis, a sixth round draft choice of the Atlanta Falcons, was the 185th overall selection in the 2007 NFL Draft. Lewis found out Sept. 1 that he made the Falcons 53-man roster. In late July, Lewis had signed a four-year contract with the Falcons that was contingent on him making the regular season roster.

“I was definitely excited to be drafted, but it also made me realize the work I still had cut out for me,” said Lewis. “After I played well in the Texas vs. The Nation game last February I felt really confident that I had the ability to play at the next level.”

From the outside it may have appeared that Lewis had a minimal chance of making the Falcons roster. He came from a Division II school and was drafted in a low round. Falcon’s General Manager Rich McKay, however, has a reputation as one of the top talent evaluators in the NFL. And defensive tackle, Lewis’ position, is the most difficult position in the NFL to field quality players.

Lewis had a monster season last year for Washburn and was named MIAA defensive player of the year. He was also impressive during the Falcons preseason games, recording 1.5 sacks as a he displayed his versatility playing at both tackle positions.

“From a physical standpoint the NFL isn’t really that much different than college,” said Lewis. “Guys are a little bit bigger, faster and stronger. It’s a lot different than college from a mental standpoint. Guys in the NFL are way more technically sound and, because of years experience at this level, have a much better understanding of the game. In college there is less pressure because you come in knowing you have a scholarship. In the NFL you are competing for a job. It’s harder from a personal standpoint because to make the roster you have to have the mentality that you are going to take someone’s job.”

With the never-ending Michael Vick saga being played out Lewis joined the Falcons during a very tumultuous time for the franchise. Although Lewis declined to talk in depth about Vick, he had nothing but praise for how the coaching staff has handled the distractions brought on by the Vick affair.

“The coaching staff has done an amazing job of not allowing it to be a major distraction,” said Lewis. “The Atlanta Falcons are focused on winning football games, and we just leave all that other stuff at the back door.”

Washburn head football coach Craig Schurig, who has stayed in contact with Lewis since he was drafted, has been extremely impressed with Lewis’ transition to the pro game.

“Trey’s approach has been very business like, and he’s not enamored by the professional sport,” said Schurig. “What he has shown so far with their organization is that they seem to be very high on him. Trey seems to have that same work ethic that he had here, and he’s just raised it to the professional level. He has such a high energy the way he plays on the defensive line. Everybody wants a defensive lineman – it’s probably the key component to a good defense in the NFL. He’s playing well enough right now that he’s pushing for playing time.”

As far as playing time, Lewis says he does not want to be a “project” and hopes to make an immediate impact early on in his professional career.

“I’ve made plays in the preseason that have shown that I can play at this level,” said Lewis. “My goal is to help Atlanta win football games and make the playoffs. If they put me on the field I’m going to prove my worth.”