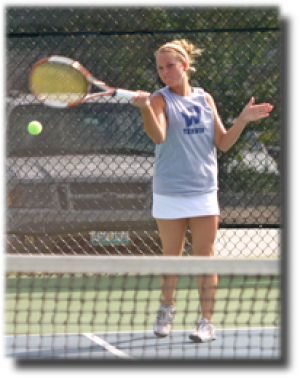 In its first big tournament of the year, the Washburn Lady Blues tennis team showed the opposition how to play some tennis. Having five seniors on the team helped.

The ITA North Central Regional began last Friday and continued into the weekend. With such a veteran team, much of the women saw action into Saturday and Sunday.

Friday, all of the Lady Blues who played won their first round singles matches. Those included: Amber Raindl, Allie Gardner, Audrie Miller Rachel Stevens and No. 1 seed Diana Goldsmith.

“As a team, I thought the first day went really well,” said Miller. “Everyone won enough matches to send them into the second day of play. Individually, I felt like I played fairly consistent, and I tried to be patient.”

Continuing the trend into the second round, both Miller and Goldsmith won their singles matches, beating Pendrak from Northwest Missouri 6-4, 6-2 and Martin from Fort Hays State 6-0, 6-1, respectively.

“During my second match, I felt like I fought hard and really tried to play smart,” said Miller.

Saturday, after both Miller and Goldsmith won their quarterfinals matches, Goldsmith advanced with a win against Amanda Morris from Emporia State 6-1, 6-1. Miller was finally knocked out.

“My game plan for day two was to come out, move my feet and try to be a little more aggressive,” said Miller. “I knew that the girl I was playing was a strong player, and so I wanted to go out there, have fun and end on a good note. I ended up losing, so I am out of play for day three.”

Doubles action for the Lady Blues was just as competitive with the team of Erika Lucero and Stevens and the team of Goldsmith and Raindl advancing past the first round.

“This tournament definitely brought with it some tough competition,” said Miller. “Coming in to the tournament, I was ready to just try my best. It’s my senior year, and I’ve been playing for three years now, so I felt like the pressure was off and I could just go out there and enjoy myself.”