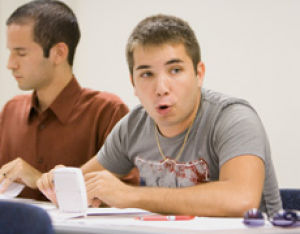 Debaters have high expectations for this season, especially with the addition of three transfer students to the team.

Christopher Neill, Jeff Jones and Joe Allen all expressed the same goal – to win a national title. They agree it is an attainable one, given the coaching staff and the talent on the team.

The newcomers had expressed interest to Kevin O’Leary, director of forensics, and assistant directors of forensics James Schnoebelen and Steve Doubledee during the past debating season and during the summer.

“Competitors were impressed with how much the squad has grown and improved, how much support it had and the ability of our diverse team to compete,” said O’Leary.

Last year, Washburn placed third in the National Parliamentary Debate Association Championships out of the 81 schools in the country that qualified. Debaters and coaches intend to improve upon that ranking, their best finish in history. O’Leary does not expect any damage to the team’s chemistry, saying that Neill, Jones, and Allen have had no trouble integrating themselves into the team.

Neill, who has six years of debating experience, is enthusiastic about the upcoming season. He debated at Central Michigan University when the team placed third in the National Forensics Association tournament, and Neill and his partner went to the triple octofinals round at the NPDA tournament. The following year, he debated at Western Kentucky University with Jones. Now debate partners at Washburn, they have been putting in long hours of preparation in the spirit of a team effort.

“Our team unity concept is that if one person loses, we all take the blame,” said Neill. “We want to succeed individually and as a team.”

The possibility of a national title for Washburn this year also drew Allen from WKU. He was a semifinalist at NFA, a quarterfinalist at NPDA and sixth place speaker at NPDA. Seven years of competitive debating have made Allen and his debate partner, Joelle Jasper, a powerful duo. They, like the rest of the team, are working toward a national title, a win at the NPDA Sweepstakes and a top finish at the NPDA Tournament of Excellence, to which only the 56 best teams are invited.

Debating is a highly competitive adrenaline rush for spectators and participants alike. Allen referred to debate as a pure academic enterprise for informed political discussion, an unprecedented experience. If debate captures your interest, be sure to attend the British debates Oct. 17 and the debate tournament Nov. 9-11, events which are on campus and open to the public.