Outlaws ride into town for showdown at Heartland Park 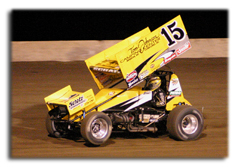 Donny Schatz drove his No. 15 car to victory lane in the A-Feature event. It was his 16th win of the season as he continues to lead the World of Outlaws Championship points standings. Schatz also won his heat race and finished second in the Trophy Dash.

The World of Outlaws rode into Heartland Park Topeka, featuring all drivers in the point standing’s top 20. Topeka’s own Chris Morgan, driving the 7C car, competed as well.

Morgan had the highlight of the night in the A-Feature event. His car got loose with 29 laps to go entering turn four and it hooked an edge. It flipped him through the air, but he was able to land it on all fours and drive away. Under red flag, he went into the pits but could not repair the damage.

“It would’ve been all right if we hadn’t broke anything,” said Morgan. “It broke the shock panel off on the front axle – it broke it off flush where we couldn’t put a new one on.”

Unable to return in the allotted time, Morgan bowed out of the A-Feature with what he felt was a good car.

“We had motor problems, just fuelin’ it and stuff, but we got it fueled toward the end,” said Morgan. “I thought I had a pretty good car.”

Donny Schatz, the points leader, ended up taking the 35-lap A-Feature win that included a $10,000 paycheck.

“We’re glad to be getting to victory lane,” said Schatz. “We’ve got very few races left, so we just have to make sure we capitalize on as many as we can.”

Schatz was in second throughout the first half of the race, closely tailing the No. 6 car of Tim Shaffer who started on the pole for the A-Feature. Schatz passed Shaffer coming out of turn four after riding Shaffer’s bumper through lap traffic.

“We ended up forcing him to make a mistake,” said Schatz. “He made a mistake and got out of the groove and I got underneath him and kind of just stayed on the bottom.”

He also won his heat race and finished second to Shaffer in the Trophy Dash, which pits the top three cars from each of the three heats in an eight-lap race to determine the top seedings in the A-Feature.

Schatz currently sits atop the World of Outlaws Championship standings, a place he’s familiar with after winning the points championship last year.

“I’m not really worried about the points chase, we’re here to win races,” said Schatz. “I’ve won a championship before. I know what it’s like to win it. We definitely do want to win it, but that’s on the back of our minds right now. We’re here to capitalize and win every race we can.”

The legendary Steve Kinser also ran but had a rough night, finishing well back in the A-Feature.

The A-Feature provided numerous cautions and red flags, the biggest of which came before one lap had been completed. Turn four yielded a five-car pileup after the cars went three wide through turn three.

For Chris Morgan, he said he hopes to return for the Capital City Clash Wednesday, Sept. 26, at Heartland Park in front of a home crowd again to race in the modified division.