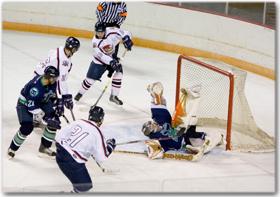 New town, new team, and the first time out on the ice against a different opponent other than yourself is bound to make for a cold opener. But the Topeka RoadRunners brought the heat to the ice in last Tuesday’s exhibition debut, skating to a 7-2 victory against the Hampton Roads Junior Whalers, an independent team from Virginia.

“The team was super excited,” said Blake Humphrey, forward. “We came out and worked really well together for the first time as a team. I expect, if we continue like this, we will be one of the best teams around.”

“We really work real hard on back checking, not giving up shots, and blocking shots,” said Scott Langer, head coach. “If we are doing our job there will be quite a few games that we don’t give up a lot of shots. It actually makes it a lot tougher on the goal tender because he is not in the game and then the next thing you know they get a little bit of attack and it’s not easy for the goal tender to stay focused.”

Within a minute of the third period, it was apparent what kind of effect not seeing a lot of shot attempts does to a goalie, as Junior Whaler James Grahm scored on RoadRunner goalie Bryce Merriam, pulling the whalers within one, 3-2.

“It’s tough for the goalie when they don’t see too many shots throughout the first two periods and then get barraged with shots in the third,” said Josh Kamrass, forward. “But Bryce being a veteran, he knows how to handle it.”

Merriam was perfect the rest of the period allowing the RoadRunners to have the biggest offensive period yet. The RoadRunners scored four goals in the third, with six different players contributing in either goals or assists.

“A lot of these guys haven’t played with each other,” said Langer. “So it’s nice to get a situation so they can get use to each other. We’ve seen a lot of good things tonight and a lot of things we,re going to have to practice on. But it was pretty positive.”

One area to work on before their opener September 29 against the Alaska Avalanche is converting on power plays. The RoadRunners had the advantage of extra guys on the ice 14 times Tuesday but only converted once.

“Power plays are extremely important,” said Humphrey. “We are just getting started and have a lot of work to do on our power play, but I guarantee we will have one of the best power plays in the league. It takes time, working together and learning.”

The RoadRunners cruised again to a victory Wednesday night beating the Junior Whalers, 8-2. The RoadRunners will play four more exhibition games on the road Sept. 19-22, before opening night.

“Guys are still competing for jobs,” said Langer. “We still have 28 guys in camp, so we are really utilizing these games to really evaluate and try to get that number at where it needs to be.”