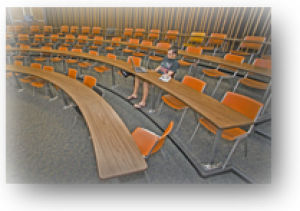 For the second consecutive year, undergraduate enrollment at Washburn University has dipped, despite a rise in the number of graduate students.

With 6,900 students enrolled this fall, numbers have dropped 3.5 percent from last year’s enrollment of 7,153 students.

Dean of enrollment management Allen Dickes said that while he is still examining what has caused the gradual drop, he believes there are a number of factors that could ultimately play a part in the decline.

“A competition in higher education has the potential to effect enrollment,” said Dickes.

With community colleges offering the same education for a cheaper price and schools such as the University of Phoenix providing the opportunity to earn entire degrees online, Dickes believes a segment of the population might view those resources as the easier way to go.

“This decline has a lot to do with demographics and the changing patterns of the population,” said Dickes.

Dickes has also found that a large amount of Washburn’s traditional market comes from high school graduates located in the non-metropolitan area of northeastern Kansas. In more recent years, the population decline in these same areas has affected the number of students that are coming to enroll at Washburn.

“Topeka’s surrounding counties such as Shawnee, Jackson and Jefferson are clearly our biggest market,” said Dickes. “We’ve overcome that ‘city college’ image; it’s cool to go to Washburn, even if you’re from right here in Topeka.”

This being said, Dickes explained that because Topeka is a small metropolitan area with very small growth, it cannot compete with Wichita State University or universities located near the greater Kansas City area.

However, enrollment decline isn’t an issue that stops just at Washburn University. Dickes believes that everybody will face the same demographic trends eventually.

“In Kansas, the public universities were down in their on-campus enrollment but showed an increase in enrollment overall, which includes off-campus sites,” said Dickes.

Working closely with President Jerry Farley and others, Dickes has set out to revise the enrollment plan, which is usually set to be implemented for three to five years.

“I’ll have to rethink where admissions counselors will spend the largest amount of time,” said Dickes. “We are not going to neglect our traditional areas, but I want to redirect some effort toward metropolitan areas.”