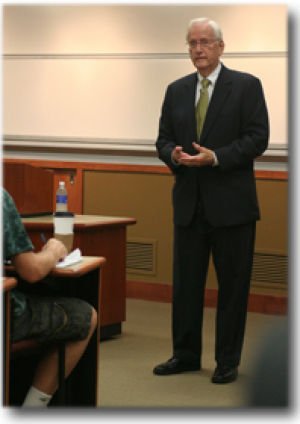 Even on the day of his wedding anniversary, Judge William S. Sessions couldn’t turn down an opportunity to talk about the law.

Friday, Oct. 5, Sessions visited the Washburn University School of Law to present his views on being a lawyer in the 21st century. Free to the public, the event was sponsored by the Center for Excellence in Advocacy in collaboration with the Business and Transactional Law Center.

Recently designated as the 2007 Distinguished Visiting Jurist of Washburn University, Sessions carries an impressive amount of experience in the law profession. From 1987 to 1993 he served as the director of the Federal Bureau of Investigation, an experience that Sessions described as a “great challenge.”

Prior to the FBI and practicing law in Texas, he served as chief of the government operations section of the Department of Justice in Washington, D.C. Sessions also served as the U.S. Attorney and as Chief Judge of the U.S. District Court for the Western District of Texas.

Currently, at the age of 77, he is a partner with Holland and Knight L.L.P, located in Washington, D.C. Sessions’s practice centers around alternative dispute resolution procedures as well as corporate governance and compliance law.

“Aside from possessing a love for this distinguished profession, there are several common denominators consistent in any century of the career,” said Sessions. “One of the biggest of these is change.”

Described by Sessions as a “constant companion,” the reality of rewritten codes and laws as well as the advancement of technology are all factors that require lawyers to be eclectic in the skills of their job.

Sessions also spoke on the importance of taking advantage of the opportunity to speak up in the law. He believes that lawyers today should be involved in what is happening, not just what has happened.

“‘Carpe diem’ is bologna if you don’t actually do it,” said Sessions. “Step forward, make a fool of yourself, be ridiculed, be punished for what you believe ought to be, because you have the opportunity to lead.”

It is this exact realization of opportunity that Sessions’ idol, Arthur T. Vanderbilt Jr., embodied in his well-known outline of the five essential functions of a great lawyer. Chief Justice of New Jersey from 1947 until his death in 1957, Vanderbilt was a noted attorney and nationally known legal educator.

The five essential functions explain that a truly great lawyer is a wise counselor and a skilled advocate. It is someone who does his or her part as an individual to improve the profession, court and law. Furthermore, a great lawyer answers the call for public service when it comes.

Toward the end of his presentation Sessions opened the floor for questions from the audience, which consisted mostly of law students and professors.

Receiving questions ranging from the truth about UFOs to international law, he took his time, giving a quality answer for each.

Sessions explained that it is the lawyer’s duty to be informed on what’s going on around the world and take the initiative to help others when they are in need.

“I didn’t plan out my life, I went where I felt I should go and agonized over leaving the court,” said Sessions. “I enjoyed what I did as chief judge and I miss that. Everywhere I went, it was always a challenge and it was those challenges that I chose to never shy away from.”