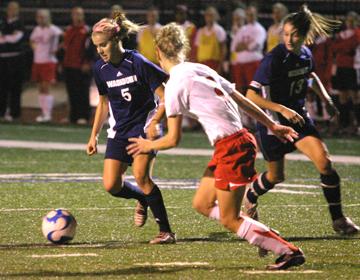 The Homecoming day sweep was made complete last Saturday night. After football and volleyball won earlier in the day, the Washburn Lady Blues soccer team finished up the windy evening by winning arguably their biggest game of the year with a score of 1-0.

In their last regular season home game of the year, the Lady Blues (9-5-4, 7-2-3 MIAA) did all that was necessary to defeat the Jennies of Central Missouri (10-3-2, 8-2-1 MIAA). And with nine minutes left in the second half of a scoreless game, the Washburn women did just that.

Scoring her fifth goal of the season, Lisa Fahey took a Traci Nigg free kick and headed it in from 10 yards out. The goal capped off a night where Washburn dominated the offensive side, outshooting the rival Jennies 15 to 4 and 6 to 3 in shots on goal. Goalkeeper Jenny Persons gained her second shutout of the year for the Lady Blues with three saves.

“I think we struggled a little bit in the first half,” said freshman Markie Gallagher. “But at halftime, coach just stressed that our game had to come from our heart and just wanting it more. We came out with a better attitude in the second half, ready to play and take it to them – and it finally showed.”

The Washburn Lady Blues soccer team celebrated Senior Night last Saturday as well. In a team filled with freshmen, sophomores and juniors, the lone senior, Brie Forman, was honored in front of a crowd of 535.

“I’m just really excited for Brie,” said Gallagher. “Being her last home game of the season, I’m glad we could get a win tonight.”

The soccer team picked a great time to go on a three game winning streak. Defeating tough conference rivals Truman State and Central Missouri as well as Missouri Western, all in one week, the Washburn ladies have worked their way back into the MIAA postseason picture.

With the win Saturday, the team is now just four points behind Truman State and one point behind Central Missouri in the conference race.

“To make the MIAA conference tournament, you just have to be one of the top four teams in the conference. We’re in third right now,” said Hooker.

With 24 points, the team now has control of its future. Five points back and tied for fourth place in the conference are Missouri Southern and Southwest Baptist.

“We haven’t really done anything special this last week to get these wins,” said Gallagher. “I think they just came with a great attitude of wanting it more.”

The Lady Blues finish out the regular season next weekend with two important games. Friday night the team will be in Joplin, Mo., to take on Missouri Southern at 7 p.m. The next day they’ll travel to Bolivar, Mo., to face Southwest Baptist at 2 p.m.

“We stumbled a little bit at the beginning of the season but now I think we’re playing really well and now we’re peaking right at the right time,” said Hooker.