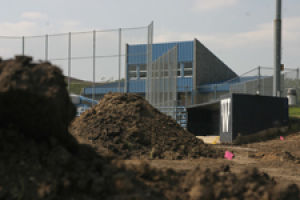 Washburn’s Falley Field is currently undergoing major renovations. The projected completion date is mid-January 2008, approximately six weeks prior to the start of the men’s baseball season. The estimated cost of the project is $475,000, primarily coming from private donations. The bulk of that money will be spent on a new artificial surface stretching across the infield from dugout to dugout, including the base paths.

“The baseball team will now be able to get much more repetition out of the facility,” said Kerry Dickerson, Washburn associate athletic director. “Rain or snow the team will now be able to get out there within minutes afterward. Even if it does snow, they will be able to field ground balls on the new surface. We are anxious for the baseball team to begin utilizing the new upgraded facilities. Overall, less maintenance will be required to get the field ready during the season. Aesthetically, all the new features will enhance Falley Field.”

Falley Field’s turf will be different than Yager Stadium’s. The football field’s artificial surface consists of 100 percent crushed rubber pellets. The baseball surface will consist of a mixture of crushed rubber and sand inside its base. Washburn baseball coach Steve Anson said that ground balls are now going to be faster and that the turf will drastically cut down on the wild bounces infielders were accustomed to.

“I think it will definitely help recruiting,” said Loren Ferre, Washburn athletic director. “It shows a commitment to the baseball program. It upgrades the facility tremendously and will be a great place to play. We will be one of the few schools in the area that will use a turf infield. With the prior drainage problems the field had, it will be a welcome relief for the team to be able practice the same day it rains. It’s a great addition for the program.”

Other new features include a new high-level drainage system in the outfield as well as new batting cages and bullpens. Portions of the outfield are also being reconfigured, which will limit foul territory space and feature a new wider warming track. In addition to these features, the athletic department hopes to raise another $55,000 for a new wooden outfield fence.

“With a facility we can recruit to, we think that these renovations will have a huge impact on what the baseball program wants to accomplish – as far as being a quality program and competing on the national level,” said Dickerson.