Soccer team looks for consistency in second half of season 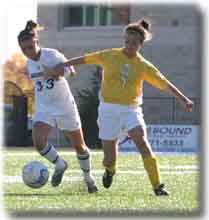 Bump and run WU midfielder Keeley Lambeth goes after the ball during Washburn's 2-1 win against Central Missouri last season at Yager Stadium. This season, Washburn lost 1-0 on the road to the Jennies Sept. 14 and will look to avenge the loss 7 p.m. Saturday at Yager Stadium.

When Washburn coach Tim Collins went to Blue Man Group last week, he may have seen some similarities between the performances of the Blue Men and his Lady Blues.

At times this season, the Lady Blues have put on some of the most impressive performances in Washburn soccer history. It is the less impressive games that have the team stuck near the middle of the MIAA standings.

Both sides of the up and down season were shown when the Lady Blues played Central Missouri on the road and Missouri Western at home on back-to-back days earlier this season.

After being shutout in a loss to CMSU, one of the country’s top teams, the Lady Blues took the field 24 hours later and tied a school record with a six-goal margin of victory against MWSU. This week, Washburn will once again play both teams on consecutive nights.

“The second part of our season we start playing each team twice. We’re into that second part now, and this is our time to go out there and show everyone we’re here to win this thing,” said defender Jordan Shefte.

When the two teams last played on Sept. 15, the Lady Blues were firing on all cylinders and set a school record for goals in a 7-1 home win. At the time, Washburn was ranked No. 9 in the country, and forward Jessica Mainz recorded her second hat trick in three games. Danielle Ayala and Keeley Lambeth scored the game’s first two goals early, before the Griffons countered with their only goal of the game. Five unanswered goals in the game’s last 23 minutes gave Washburn an unmatched 7-goal total.

The game is a good chance for the Lady Blues to pick up three points in what would be a key MIAA victory, but the win will not come as easily as it did in the previous match up.

“I don’t foresee us scoring that many in this game,” said head coach Tim Collins. “[Head coach Jeff Hansen] has them playing really well. I think they’ve improved quite a bit, and it will be more difficult with this game being on the road.”

On homecoming Saturday, the Lady Blues return to Yager Stadium for a 7 p.m. game against CMSU.

The Lady Blues now get a shot at playing the conference leaders with the home crowd behind them. Washburn has yet to lose an MIAA game at home this season, and getting six points in two days would be a big step in ensuring the Lady Blues a spot in the MIAA tournament.

“We’ve never played on homecoming night before,” said Collins. “It’s a great opportunity for the program and a good chance to get a lot of fans to come out.”

Up to this point, the identity of the 2007 Lady Blues has been a middle of the road team that is bordering on a jump into the top two or three spots in the MIAA standings. So far, the team has not lived up to the players’ lofty expectations of repeating as MIAA champions and improving on last year’s sweet 16 finish. However, it is not too late for the team to begin a winning streak and make some noise in the postseason once again.

“We can get better by just putting teams away and playing hard for both halves, not just going hard for one,” said forward Manon Englehardt.

As the Lady Blues enter the final four games of the regular season, their performance over homecoming weekend will decide where they finish in the standings, and whether or not they will have a chance at defending their MIAA crown in the conference tournament.

“These last games are huge, and we hope to get momentum from our home and away games this week,” said Collins.