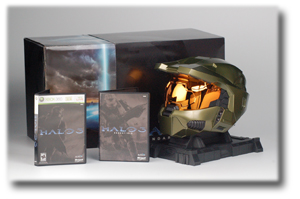 Ultimate gamers package Halo 3 has been one of the most successful launches of any video games in past decade. With three packages to choose from, most gamers have had Halo 3 Legendary edition on reserve for more than a year.

From its eye-popping graphics and enthralling gameplay to the multiple ways you can share your brain-splattering exploits with friends, Bungie Studio’s Halo 3 seems to be a colossal hit.

Building on the core of what made the second installment in the trilogy a smash, the online multiplayer aspect of the game is still a success, with millions of gamers jumping online every day to frag, snipe and splatter opponents in matches ranging from tactical to combative. Xbox Live, the online gaming system used to pit players halfway across the globe (or across the street) head-to-head, lets gamers get the full Halo 3 experience. Utilizing innovative game styles with innovatively-created maps, it’s truly a unique experience.

However, the ultimate sign of defeat or success for a game lies in its campaign mode. While the artificial intelligence for Halo has never been shoddy, the level it has been brought to in the latest installment of the series brings it to ludicrous heights. Enemy AI will strategically snipe, deploy armor, and even kamikaze themselves at you with lit grenades in both hands. Combatants will stand strong against you while their leader is with them, but once the head of the snake is cut off, the foot soldiers can quickly become panicked and unpredictable. Pairing addictive gameplay with a well-rounded story, Halo fanboys will be able to sink their teeth into an ending befitting to the image of Master Chief, leaving little left to be desired.

As if the built-in maps weren’t awesome enough, the minds at Bungie created a tool known only as the Forge. Allowing users to control the placement of weapons, vehicles and objects before and during a game, the Forge brings a completely different method of game play to Halo 3. A game in Forge acts exactly like any normal multiplayer game would, except that instead of worrying about taking a sniper shot to the face, players now need to worry about such little things as a tank being dropped on them.

Probably the most impressive feature built into the game, however, is in the theater mode. Similar to the replays found in many of the sports games on the market, theater mode allows gamers to relive a particular stage in a campaign or a heated battle that occurred on Xbox Live by having it re-rendered in high definition. Viewers can watch from the standard first-person point of view of their character, switch to another player to see the game through their eyes or detach the camera entirely to watch the drama play out in a floating orb of omnipotence. Amazingly, through some kind of video-compression magic, Bungie has been able to make a 30-minute high definition video take up less than 3 megabytes on an Xbox hard drive, allowing for a colossal amount of video data to be stored, recorded, photographed and shared with friends.

All in all, Halo 3 is a fitting conclusion to what seems to be the end of the line for Master Chief. While only time and rumor will tell if there is a possibility of a Halo 4, the plethora of options and game strategies will be enough to keep even the most dedicated of fans satisfied for quite some time.