Breast health: in sight, in mind 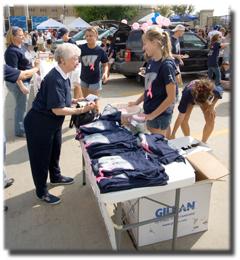 Zeta Tau Alpha sorority launched “Think Pink” last week to promote breast cancer education and awareness. With support from Washburn students and the community, Zeta’s philanthropy efforts contributed toward the worldwide campaign for breast cancer awareness for the designated month and beyond.

The week’s events, coordinated by Zeta’s service chair, had everyone thinking pink. On Monday, passersby donated money to the cause by voting at the “Best Chest Contest” booth for their candidate of choice. “Think Pink” T-shirts, which the Washburn Student Government Association covered the cost of, went on sale Tuesday in the Union. From 4-7 p.m. Wednesday guests at Texas Roadhouse could have donated 10 percent of their bill by mentioning breast cancer education and awareness. Many fans wore their T-shirts on Saturday to tailgate Washburn’s football game and “Pink Out” Yager Stadium. The sponsored festivities will end with Bowling for Breast Cancer 8 p.m. tonight at Gage Bowl.

Lizzi Volk, president of Alpha Phi, was proud of the way Zeta represented such a big part of Greek life to the community.

“Zeta publicized their message really well,” said Volk. “Their commendable efforts have helped a cause that affects the lives of so many.”

Zeta president Nikki Neuman notes that the sorority’s fourth year of participating in “Think Pink” included some changes in comparison to years past. The “Best Chest Contest” was new as well as the weekend schedule. Zeta also opted for the “Pink Out” instead of having a barbecue on Friday. Considering the success of these changes in events, they may be more familiar next year.

A majority of the money raised went to the Susan G. Komen for the Cure fund. However, Zeta’s message goes beyond events and money.

“It’s about getting the awareness out there and educating people on how breast cancer can affect so many people,” said Neuman.

Zeta’s members seemed enthusiastic about their philanthropy. Neuman said that everyone was part of a committee, which was likely responsible for the pink ribbons seen across campus. The “Think Pink” message resounded in the community as more and more people became aware of the issue’s relevancy in their own lives.