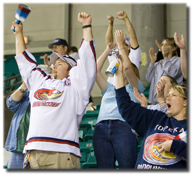 Fans might have enjoyed the finish, but for head coach Scott Langer, it wasn’t RoadRunner hockey.

“It was exciting for the fans,” said Langer. “But we were lacking energy in the part of the game we were supposed to be good at which is a hard-working, back-checking team. Couple of the goals scored was a result of our guys falling asleep. In the long run we found a way to win and we got to build on that going into next weekend.”

The RoadRunners converted on two of four shootout attempts to sweep the Alaska Avalanche for the weekend. The RoadRunners are now 4-1-1 and will travel to Wichita Falls to take on the Wildcats.

“It wasn’t a pretty win tonight,” said Corey Jendras, forward. “But we are a hard-working team and we find a way to win.”

Jendras converted the first shootout attempt to put the RoadRunners in the lead, and fellow forward Josh Kamrass hit the other. RoadRunners goalie Bryce Merriam only allowed the Avalanche’s Dylan Jones to convert a goal and blocked four other attempts.

The RoadRunners had a chance to stop the game from going into overtime. With five seconds left in the third period an Avalanche defender was called for a penalty that left RoadRunners Jake Hutt an open opportunity at Avalanche’s goalie Dusan Sidor. But Sidor blocked Hutt’s attempt.

“It’s always mind rattling when something like that happens,” said Jendras. “You wish you could’ve ended it right then and there. But we played a hot goal tender tonight and we needed the extra five minutes and a shoot out to pull it off.”

The first period was an offensive period as RoadRunners fans saw three goals scored in a span of 2:55. The RoadRunners were the first to strike Saturday and ignited the scoring spurt, as forward Eric Artman, assisted by forwards Matt Hartmann and Jake Hutt, scored with 11:04 left in the first period.

However the Avalanche responded 24 seconds later as forward Kyle Pichler, assisted by Jones, scored to tie it at 1-1. Then to conclude the scoring run, the RoadRunners took the lead again 2-1, as Jendras, assisted by forwards Caleb Wolfgram and Kamrass, scored with 9:09 left in the first.

“When we put in a goal we have to put the foot down,” said Jendras. “We can’t let up a goal like we did and then another one. When you get one you just got to keep on rolling and stay consistent.”

The Avalanche would gain back momentum going into the second period as forward Tyler Currier, assisted by T.J. Wilson, evened it up at 2-2 to end the period.

The RoadRunners owned the stat book in the first period, but at the end of the period the score was tied 2-2. The RoadRunners converted two of five power plays into goals but had 13 shot opportunities at the net. However, the Avalanche were much more efficient, converting two of three shot attempts into goals.

The RoadRunners continued to stay aggressive on the offensive side of the ice in the second period. The RoadRunners had 12 shot attempts at the net compared to the Avalanche’s six. However neither team was able to convert those shot attempts into goals as it remained tied going into the third period.

“When the goals are not falling you just have to keep going to the net and keep on them and eventually they will go,” said Langer. “Sometimes teams score in spurts and hopefully that will come around for us. A lot of our guys are young that are skill guys and will wind up scoring goals. It’s just going to take some time for them.”

The third period and overtime was much of the same. The RoadRunners had five combined shot attempts and converted none of them, forcing the shootout.