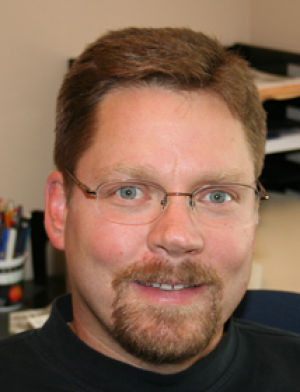 Imagine an organism that feeds on human brain tissue but is also cannibalistic, can clone itself, can survive for long periods of time with little to no resources and, under the proper conditions, can live virtually forever. This organism can even change forms and spontaneously grow appendages.

While it sounds like something out of a bad sci-fi film or an episode of “The X-Files,” Washburn professor John Mullican is studying just such an organism.

Far from being an alien life, Naegleria fowleri is a type of unicellular organism called a free-living amoeboflagellate. Naegleria fowleri gained national press when six otherwise healthy people were killed after being infected by the pathogen. For the most part, it is nothing of which to be scared. It can only infect someone who is exposed to it in warm freshwater, such as a pond or lake, and who has suffered enough nasal trauma to allow the amoeba access to the olfactory nerve. If the amoeba can access the nerve, it will travel into the brain where it will feast on brain tissue and cause primary amoebic meningoencephalitis.

John Mullican, associate professor of biology, has been studing Naegleria fowleri since 1988. As a molecular biologist, he’s primarily interested in the mechanism that allows the amoeba to transfer from its amoebic state to its cyst state, or from amoebic to flagellated.

“You can leave the pathology to someone else,” said Mullican.

For the nervous types, there is virtually zero risk of infection from working with the amoeba. It is only dangerous when ingested nasally; even well water possessing the pathogen is safe to drink.

Mullican worked with undergraduate researchers, primarily Sam Smith and Casey McNeil, to identify the first wild culture of fowleri in Kansas. The team obtained cultures using petri dishes containing bacteria to feed the amoebas, then killed the bacteria and isolated the amoeba clusters. The amoebas were then grown in liquid cultures or non-nutrient agars. Next, they were viewed under a microscope for identification. To a trained eye the fowleri are very distinctive, especially when placed in water because it causes them to sprout two primative appendages called “flagella.” These flagella allow the amoeba to swim. After the primary identification, genetic tests were done for confirmation. Finally, just to be sure, the researchers will send samples to Virginia Commonwealth University, where pathologists will test to see if the amoeba is infectious.

Now that the amoeba has been identified in Kansas, Mullican would like to work with pathologists at The University of Kansas Medical Center to see if any fowleri infections were misdiagnosed as menigitis or influenza prior to 1965. Mullican described it as a “‘CSI’/’Cold Case’ sort of process.”

PAME starts with flu-like symptoms and is often misdiagnosed as viral or bacterial meningitis. The delay caused by the mixed diagnosis and the formerly-small number of doctors who know about the amoeba combined with the severity of the treatment required to treat an infection means that only eight people have ever survived an infection of Naegleria fowleri. However, fewer than 300 people have been diagnosed with the amoeba in the United States since it was discovered in 1965.

Much is still unknown about Naegleria fowleri, such as how much of its DNA shuffling comes from its phagocytic diet and what triggers the changes in forms. Mullican is working with Drs. Tracey and Paul Wagner to answer the second question while researchers in California are sequencing the genome of the amoeba to help answer the first.

With so many researchers working on it and evidence pointing to a rise in infections, Naegleria fowleri is sure to retain semi-celebrity status in amoebic biology for quite some time.