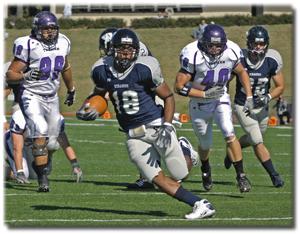 “It was a game I had to have because I have been a little inconsistent as of late,” said Butler. “The two touchdowns – I just see them as a way to help my team win. What really mattered to me is the blocked pass and sack I had today as well.”

Butler’s two rushing touchdowns were two of eight touchdowns on the ground the Bods scored Saturday. The Bods backfield rushed for a combined 428 yards, setting a school record for the most rushing yards in a game.

“There are probably some things on film we will see that we will have to correct, but the running game, everything was going good today,” said Craig Schurig, head coach. “We play a team next week that is much better at defending the run, but we will need those yards on the ground to pull out a win.”

All the rushing didn’t help speed the game along. Out of the 4,409 fans in attendance, the ones who stuck around for the whole contest witnessed 3 hours and 39 minutes of football.

“I was sitting on the bench the whole fourth quarter and the game just seemed to drag along,” said Butler. “That is definitely the longest game I’ve played in.”

Most of the Bods’ starters got to rest most of the fourth quarter. The Bods will take to the road this Saturday to take on the No. 9 Northwest Missouri Bearcats. The Bearcats are 6-1 and 5-0 in conference play.

“I haven’t had a chance to watch them on film, but I know just because they are undefeated and ranked so high, doesn’t mean we’re intimidated,” said Butler. “We’re going to come out and play hard. The starters got a lot of rest today, and with a win we continue to control our own destiny.”

The Bearcats, who finished the season No. 2 in the nation and the MIAA champions last year, got the better of the Bods in a 31-26 contest.

The Bearcats head coach Mel Tjeerdsma was the only head coach to pick the Bods to win the conference in the MIAA preseason poll. The rest of the coaches came to the consensus that the Bearcats would win it. Predictions may not be that far off as the Bearcats are in lead now, with the Bods sitting one game back.

“We slipped up against Central, a loss we really didn’t want,” said Schurig. “But Northwest is a team you have to beat anyways because they are so good, they’re not going to lose. That’s just how things happened to work out and if we play hard I think we have a shot.”

Mosley, after gaining 147 yards on the ground this past Saturday, needs 70 yards to surpass Trent Hearn’s mark of 3,154 yards.

“Mosley has always been that special back since he’s been here,” said Brill. “Hearn was a great physical runner but now Mosley has filled that gap and now it’s his time to shine and he deserves it.”

The Bearcats also have a running back making a name for himself, senior Xavier Omon. Omon rushed for 154 yards and two touchdowns in the Bearcats 17-10 win against Fort Hays State this past Saturday and has rushed for 1,110 yards so far this season.

Omon is only the seventh player in Division II history to rush for four consecutive 1,000 yard seasons.

“You don’t look to stop him but prevent him from making big plays,” said Schurig. “He is an exceptional player, but our defense matches up well with their offense. But last year was a situation where we just let him make too many big plays.”