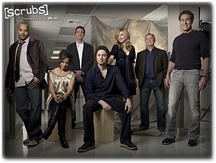 After six seasons of hilarious hospital hijinks, the final season of “Scrubs” will begin 8:30 p.m. Thursday, Oct. 25, on NBC.

Filled with more dysfunctional relationships than a trailer park in Arkansas, the comedy has developed a lot of depth in its time. From the intricate father-son relationship of main character J.D. (Zach Braff) and his mentor Dr. Cox (John C. McGinley) to the on and off again romance between J.D. and fellow doctor Elliot Reed (played by Sarah Chalke), even to the completely berserk family created by Dr. Cox and his ex-wife/lover and mother of his children, once comical relationships have gained meaning.

The success of the series has led to success on the big screen as well, with Braff starring in “The Ex” last May and McGinley playing the role of a hilarious gay cop in the blockbuster hit “Wild Hogs.” Chalke is set to play a role in an upcoming movie titled “Mama’s Boy,” starring “Napoleon Dynamite” star Jon Heder as well as several well-known thespians, such as Diane Keaton, Jeff Daniels and Anna Faris. Donald Faison, who plays Braff’s best friend on Scrubs, is also planning to star in a movie called “Next Day Air,” according to imdb.com.

Aside from the blooming film careers of the cast, there is still a lot of plot to be settled in the show. Elliott is preparing to marry her fiancé Keith, and J.D. is about to become a father.

Yet the last episode of season six left a maddening cliffhanger involving the two in a romantic situation that could jeopardize both plotlines. When the episode was actually filmed, it was still a possibility that it would be the last episode of the series, as neither NBC nor “Scrubs” producers had agreed to a contract extension for another season.

As the season resolves, the drama and comedy will certainly not die with it. “Scrubs” fans can still enjoy the show on Comedy Central or purchase the seasons on DVD.

Death may be a main theme in the show, but the humor will still live on.